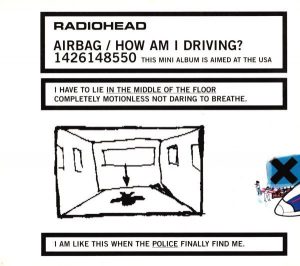 In a deep, deep sleep
Of the innocent
I am born again
In a fast German car
I’m amazed that I survived
An airbag saved my life

Throughout, “Airbag” starts and stops at will, as soaring airy guitars drift in and out seemingly at random. Like they’re trying to get at the exact moment in time that the car was just about to crash, and freeze it forever, while Yorke pretends that being spared was part of some cosmic plan.

In an interstellar burst
I’m back to save the universe

It could have all been too much. And in fact, it was all too much, at least at first: OK Computer didn’t make my 1997 Pazz & Jop ballot, but a decade later, when I ranked my favorite albums of 1990s, it was my second favorite album from that year — and in my top 25 — as the subsequent decade showed just how ahead of its time it really was.