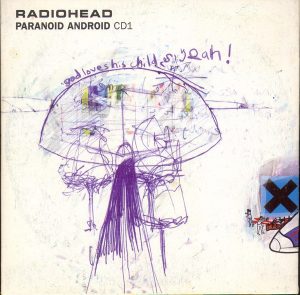 Basically three different songs stitched together — like you know, The Beatles or Yes — “Paranoid Android” starts off with some offbeat drums and a passel of acoustic and electric guitars all fluttering and twittering around each other, while Thom Yorke sings in his most haunted falsetto.

Please, could you stop the noise
I’m trying to get some rest
From all the unborn chicken voices
In my head

The “I may be paranoid, but not an android” was done via the same text-to-speech that powers all of “Fitter Happier,” while the rhythms before and after the chorus wander between 4/4 and 7/8, because why not. I mean, “Paranoid Android” is basically about being freaked by an angry person in a bar — and those types of songs are best with wandering time signatures.

And just like that angry person at the bar, “Paranoid Android” suddenly just explodes, as Jonny Greenwood and Ed O’Brien leap in with their guitars, sending the whole song scurrying away from their high level detonations — Phil Selway leading the escape with a long frightened drum roll — after which, Greenwood tries to destroy the whole song with a crazed solo.

But all he does is beat it into submission: after the rhythmic opening and the chaotic middle, “Paranoid Android” turns itself into a dirge, moving slowly droning like a cloister of monks with Yorke providing the benediction which climaxes with a repetition of “god loves his children” a couple of times before Greenwood and O’Brien leap in one last time and crush it once and for all.

When people called OK Computer “prog” — and I’m one of them — it’s a song like “Paranoid Android” they’re talking about, from the title to the multipart suiteness of it all to the crazy-ass guitars, but it was also a pop song. While it didn’t do anything on the U.S. charts — are you kidding? — it was a massive hit in the U.K., making it all the way to #3, and keeping up the momentum they’d established with the singles from The Bends.