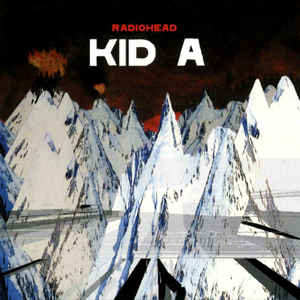 Because two decades down the line, the menace of the opening of “Everything in Its Right Place” — those tumbling opening notes on that synth that also kind of sounds like an electric piano, the weird cut-up vocals, the rhythmless sense of motion, and of course Thom Yorke’s eerie repetition of the word “every-thing,” which was spooky enough that when he got to “in its right place,” you knew that the opposite was actually happening: everything was wrong.

Which was true: in the aftermath of the OK Computer cycle the band was suffering burnout and Yorke had a mental breakdown and didn’t want to make the expected follow-up to OK Computer, tentatively titled OK Boomer. And so he wrote “Everything in Its Right Place” on a piano, and when the band couldn’t get an arrangement to work, he and Nigel Godrich stuck it on a synth and started fucking with it.

And so, as “Everything in its Right Place” progresses, it gets more and more fucked-up, more and more weird, as they stack echoed looped vocals on top of each other, giving the track an eerie, near-psychedelic feel, which builds and builds and builds until finally all of the vocals crash into the synth wash, which smooths everything over for a bit until the vocal loops fight their way to the surface again.

The whole song is such a bad trip that I occasionally wonder if it wasn’t responsible for the darkest timeline we entered with the election that happened less than a month later.

Well, it’s probably not fair to pin that on a single song, not even a song as weird as “Everything in Its Right Place,” but what is fair is that the finished version unlocked something in Radiohead, and they chose to make the rest of the record following its lead. Oh, and check out at least one of the live versions below, featuring Jonny Greenwood and Ed O’Brien manipulating and looping Yorke’s vocals, giving the song a whole whole new dimension.

“Everything in Its Right Place”


Fan-made video for “Everything in Its Right Place”


“Everything in Its Right Place” at Glastonbury, 2003


“Everything in Its Right Place” at Glastonbury, 2017