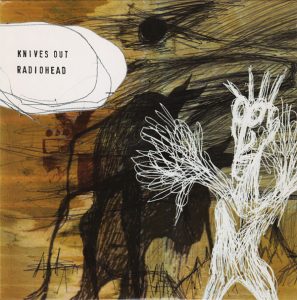 And while I think that Kid A is the better record — why would you not pick the best songs to put out first? — they were so on fire at this point that Amnesiac has it’s charms, most especially on “Knives Out,” the most normal-sounding song on either record, until you realize that also doesn’t really sound like any previous Radiohead song either.

What it does sound like is The Smiths, which isn’t surprising, as every U.K. band that’s come around since The Smiths is legally required to do at least one song that is influenced by The Smiths.

I was gonna snark that it took all three Radiohead guitarists to put together what Johnny Marr could do via overdubs, but that really seems like a tie. With Thom Yorke providing the acoustic guitar, Ed O’Brien the background noises and Johnny Greenwood doing spidery leads, they definitely have the vibe. And, naturally, Thom Yorke contributed to it by singing about death. As you do.

Unlike Kid A, Radiohead released singles from Amnesiac, but unlike their previous five singles, all of which cracked the top ten in the U.K. — where they were huge pop stars as well as huge rock stars — “Knives Out” stalled out at #13, perhaps while it invoked The Smiths musically and lyrically, it was really more of a slow burn than an instant grabber.