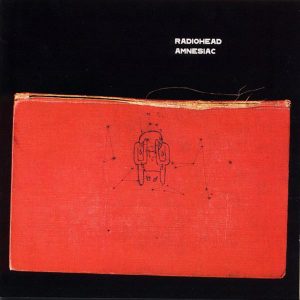 98% of the time when an artist releases two entirely different versions of the same song, and one of those versions is uptempo and groovy and the other is sludgy and doom-filled, I’m going to pick the uptempo one.

This, right here, is the exception.

While I love the Kid A version of “Morning Bell” enough to nearly have written about it yesterday before “Knives Out,” there is something about this version which just fucking haunts me. Like this was their justification for putting out Amnesiac in the first plact — the compare and contrast between the two versions.

I guess while the other one focuses on the groove, this one focuses on Thom Yorke’s vocals, which are off-the-charts gorgeous. And “focuses” isn’t quite the right words, as he’s kinda buried by the music, except that would intimate that the music was loud, but rather he continually tries to burrow underneath a song that is essentially a death march. A slow, 14-day death march that is also beautiful beyond compare.

I mean, really more like “mourning bell,” especially at the end when the keyboards swell like Mourning Doves way off in the distance during one of those hot Fresno summer mornings when I didn’t really wanna be up but I had to, but I would hear their sound, with the tricksy echo that made it seem like they were much further away than they really were, like miles and miles away when they were probably right above my head.

That’s what “Morning Bell/Amnesiac” reminds me of, and that’s why I love it so much.