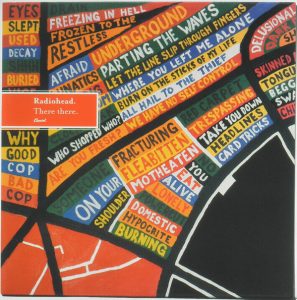 It’s one of my favorite moments in any Radiohead song. For nearly two minutes, “There There” has been kinda floating around the room, driven by Phil Selway’s lighter-than-air toms and Thom Yorke and Ed O’Brien’s etherial vocals. And then, all of a sudden, completely out of nowhere, Selway does a couple of quick snare rolls:

So simple. So startling.

With a lesser band, those drum rolls would signal the beginning of a new phase of the song, but rather, they go instantly back to what they were doing previously, delaying the inevitable for a bit longer. I think that’s outside of “Idioteque” and “Karma Police,” “There There” is probably my favorite Radiohead song: it’s an absolute master class in slowly-escalating tension.

Unlike the previous two songs, though, I barely know the lyrics of “There There,” which Yorke sings in his impeccable falsetto, ably assisted by O’Brien.

As the third verse starts, Jonny Greenwood kicks in with a three-note lick seemingly from the other side of the universe. Once again, nothing fancy in any way, shape or form, but it starts to bring “There There” into sharper focus, but not full focus. That comes with Phil Selway, who finally kicks in with a hard-charging beat as Greenwood cranks up his guitar and suddenly “There There” starts rocking the fuck out, releasing every single ounce of tension it built up over the previous four minutes, finally ending with one more Selway drum roll. Whack-it-a-duh! Whack-it-a-duh!

“There There” was probably the last Radiohead song to get any kind of U.S. radio traction, as well as their last U.K. top ten hit. After that, their music got harder to parse as it got more intricate and less catchy. At least, to me. There were some cool songs: “Bodysnatchers,” and “Burn The Witch,” to name two, but nothing that I loved as much as the ones I’ve written about.


“There There” live at Lollapalooza