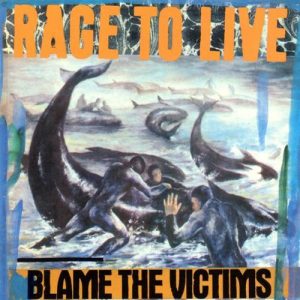 This, right here, was one of the reasons I started Certain Songs. Sure, it’s fun to go deep on my favorite artists, and we’ll be doing that soon enough once again, but right now, let’s talk about one of the most obscure songs I’ll ever post about, the utterly magnificent “My Heroine” from New Jersey’s Rage to Live.

Given that this was all over thirty years ago, how I even heard of Rage to Live or decided to purchase Blame The Victims or where I got it or anything outside of this song is lost to the mists of time. But I’m gonna guess that I saw a good review somewhere, and because Glen Morrow from The Individuals — whose “My Three Sons” and “Walk By Your House” are two of the greatest indie-pop songs of the early 1980s — was the founder of this band, and I was curious what he was up to.

And while I don’t remember a single thing about the rest of the record, “My Heroine” utterly kills, starting with crackling guitar that then explodes into a ringing soaring riff over as massive snare, like somebody finally figured out how to cross U2 with R.E.M., that never lets up even when Morrow starts singing.

How obscure is this song? No lyrics on the internet.

She was my heroine
Look what they’ve done to her
Are they doing it again?
My heroine
Oh my heroine

And so it goes, building towards the chorus, slipping into higher gear after higher gear.

On the word “heroine,” Morrow is joined by what sounds like mostly female backing vocals, lending other-worldly sheen to the word until they all blast off together on the last “heroinnnnnnnnnnnnnnnneee”, as the bass burbles forward, the and the guitarswhich almost instantly topped by the backing vocals having a go all by themselves.

Readers, this is so fucking transcendent, and they love it so much that it pokes up off-and-on for the rest of the song, as Morrow continues to sing about his heroine. But honestly, I have no idea who she might be and what she might be doing or why she was even his heroine in the first place, because I’m just singing “herrrrrr-ooooooooooo-wwwwiiinnnnnn” at the top of my fucking lungs each and every single time it comes up for the rest of the song.

I loved this song so much that when we put together a one-off band — the legendary Noisy Cats — in the fall of 1990, I forced Joseph, Colleen and Don to all learn it, just so I could play the drums to it. Man I wish I had a tape of that show. But at least I have this version of this song. And now you do, too.