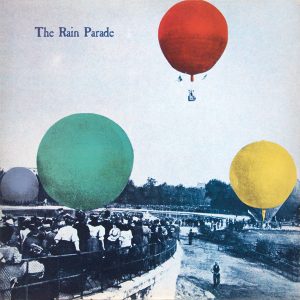 Outside of The Bangles, of course, no musician from the Paisley Underground had more commercial success that David Roback, when his most successful attempt to make music so slow and etherial, Mazzy Star, had a massive modern rock hit single with “Fade Into You.” But, of course, in Mazzy Star, Roback was overshadowed by Hope Sandoval, whom at the time, epitomized the word “dreamy” on just about every level.

In any event, even at the time, I’m guessing that a lot of people who bought the Mazzy Star singles and album just assumed that Hope Sandoval was named “Mazzy Star” and didn’t realize that she and Roback were equal partners, and he’d been doing the slow psychedelic thing since the early 1980s.

And for me, David Roback’s — who sadly passed away earlier this year (do you even remember earlier this year?) — most successful foray into psychedelia was the Rain Parade’s debut album, Emergency Third Rail Power Trip. With Roback playing guitar, producing, and even writing, songs like “What She’s Done To Your Mind,” “One Hour 1/2 Ago” and “Talking in My Sleep” were all great updates of 60s California psychedelia, full of corkscrew guitars, shimmering harmonies and acid-trip lyrics.

That’s the third verse of my favorite song from Emergency Third Rain Power Trip, “This Can’t Be Today,” a co-write between bassist Stephen Roback and guitarist Matt Piucci, featuring a cool bassline from Stephen Roback and incredibly atmospheric keyboards from Will Glenn, which float like spaceships in the verses and every once in awhile break the song down entirely in order to fill your entire field of vision.

Those breakdowns happen after the choruses, which have been ringing in my head since 1983, the guitars ringing out in unison as Piucci sings in a fever dream:

One of the cool things about “This Can’t Be Today” is just how confident it is. For example, after the second verse, they basically do a verse and a chorus without any vocals. No solos, almost like Piucci & Stephen Roback only wrote three verses, but they ended up playing four, and figured “what the hell?”

In the end, there’s a long coda that goes off in a completely new direction, with guitarists David Roback and Matt Piucci alternating guitar licks while drummer Eddie Kawla thumps and rolls and Will Glenn brings the spaceships home over shakers and handclaps (!). It’s haunting and gorgeous, and absolutely one of my favorite things to come out of the Paisley Underground.

“This Can’t Be Today”