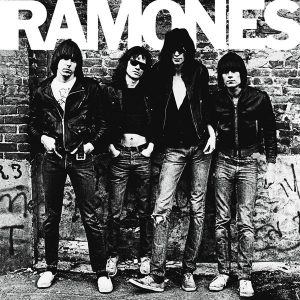 And then there are the lyrics on Ramones: darkly funny; smartly stoopid and of course, just incredibly wrong, especially by today’s standards. And of course, looking at the guys on the cover, leather-jacketed, jeans ripped — and was that one guy giving us the finger? — you could only wonder what kind of depravity they were getting up to.

Which is all to say that I can’t imagine any band today even trying to write a song like “Beat on The Brat,” Joey’s response to what Dee Dee claims was a real-life incident.

What’s so dangerous and subversive about this lyric is just how much fun Joey is having while he sings it, alternating a clipped, faux-upper-class accent one “beat on the brat” with the joyful “oh yeah.” And then he really slips into character, trying desperately to justify his actions.

This is the first of the darkly humorous Ramones songs, one of the things that they became known for.

And while quite a few Ramones songs deal with incredibly disturbing things, this might be the only one about child abuse. Also, Johnny’s clipped guitar on the verses — or is it the chorus — was another flavor of Johnny’s world-changing style.

Finally, he doesn’t remember this, but I seem to think my brother John thought this song was funny and enjoyable when he was around 10 or so, meaning that he instinctively got the satire they were going for.

“Beat on the Brat”