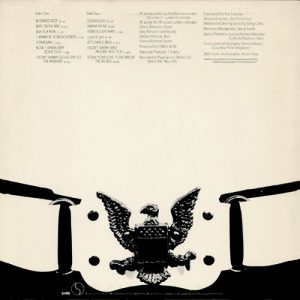 How much cleverness can you cram into 92 seconds?

A whole universe worth, as it turns out, as Joey’s song about the potential fate of a bunch of kids hanging out and drinking set up characters who would reoccur in future Ramones songs.

And while Jackie and Judy weren’t as recurring characters as say, Holly and Charlemagne in the Hold Steady songs, they eventually returned on End of The Century, which belied the pessimistic chorus.

After which, Joey gleefully shouts “Second verse / Same as the first” over handclaps (!) and while it seems like a throwaway, it’s also awesome, and topped later on when Joey gleefully exclaims — over more handclaps, natch — “Third verse / Different from the first”

Third verse, different from the first
Jackie is a punk
Judy is a runt
They both went down to Frisco
Joined the SLA

And by the way, that third verse happens after a quick bridge which features Tommy smashing his cymbals while Dee Dee goes “oooooooooooh oooooooooooooooh”. Oh and did I mention that all of this happens in a mere 92 seconds?

Also, while the song is called “Judy is a Punk,” nowhere in the lyrics do they actually say that.


“Judy is a Punk” live on Don Kirshner’s Rock Concert