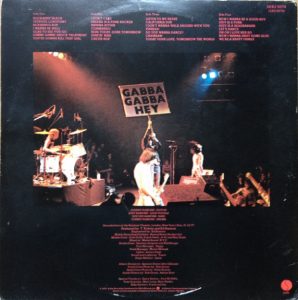 But they saved the greatest performance on It’s Alive to the very end. As the 27th song on an album clocking at under an hour, the live version of “Now I Wanna Sniff Some Glue” is 78 seconds of joyous ferociousness, a pure glue-sniffing rush of a rock ‘n’ roll song that just might be my favorite Ramones song.

I love the bloody single-mindedness of “Now I Wanna Sniff Some Glue,” as there is literally no way you could possibly misinterpret it any way, shape or form.

Why is this song different from all other Ramones songs?
The arrangement, which has some great business between Tommy and Johnny, and some self-parody with Joey and Dee.

At first, “Now I Wanna Sniff Some Glue” explodes out of the gate with Joey and Dee screaming the lyrics a couple of times, then they all stop, and Johnny and Tommy play off of each other: Johnny hitting barre chords and Tommy smashing his snare.

Over the last “whack-whack”, Dee-Dee shouts “1-2-3-4!!” after which he and Joey sing the lyrics basically a capella, accompanied only by Tommy’s hi-hat. After which Tommy and Johnny switch it up:

After which Johnny spends the next few measure playing the greatest thing he ever played, somehow tunneling deep deep into the center of the earth and back with his guitar. By the way, this all happens — all of it — in 38 fucking seconds. The other half of the song is basically all four of them heading for the land speed record of rock ‘n’ roll.

“Now I Wanna Sniff Some Glue”