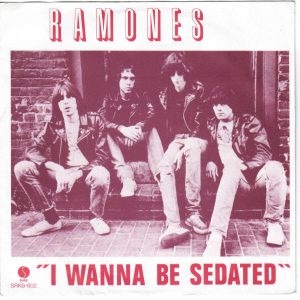 While it was never a hit, the endlessly catchy “I Wanna Be Sedated” has essentially become one in retrospect. That sometimes happens, of course, and in a weird way, the story of “I Wanna Be Sedated” mirrors the rise of the Ramones from commercial failures to eternal icons.

And why not? From the very opening, “I Wanna Be Sedated” is a massive hook machine, Johnny playing brightly muted surfy chords over which Joey sings the chorus first.

“I Wanna Be Sedated” was written by Joey about being stuck in London during the Christmas holidays — the shows where they were recording It’s Alive! — and because everything was shut down, he had nothing to do but watch movies in his hotel room. Which spurred immortal lyrics like

As always, Joey kills on the vocals, especially when he sings “oh no, ho, ho, ho, ho”. As the song progresses, they pull out every trick in the book, leveraging a couple of modulations, and a ringing guitar lick that was probably played by Tommy or Ed Stasium as well as leveraging The Handclap Rule — handclaps make a good song great and a great song immortal — all over the place.

In the end, it all come together, as Joey pleads “ba ba baba, baba ba baba, I wanna be sedated” over and over again while the ringing guitar lick and handclaps swell up and it is utter pop perfection.

Why is this song different from all other Ramones songs?
If you only know one Ramones song — and literally, why would you do that to yourself? — it’s probably “I Wanna Be Sedated.” But it had a weird path to that dominance: it was originally only a b-side to “She’s The One,” which of course went nowhere. However, it was included and released as a single from the soundtrack to Times Square, which also doubled as a pretty decent new wave sampler, if you could ignore the Robin Gibb and Desmond Child songs.

In any event, its profile was slowly raised throughout the 1980s, to the point than when the Ramones released their first compilation, 1988’s Ramones Mania, it was the opening track, and they even made a video for it, though not another single. The 80s were a weird time, mannn.

In any event, for whatever reason, you would hear “I Wanna Be Sedated” on various alt-rock stations over the years, and its been covered loads of times as well. And it also is the only Ramones song I ever got sick of, though only for awhile, as its genius is still too much to resist forever.

“I Wanna Be Sedated”