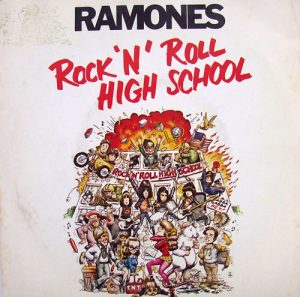 It doesn’t matter that the Ramones were the third choice to play the band in Rock ‘n’ Roll High School, after Cheap Trick (!) and Todd Rundgren (?).

It doesn’t matter that Dee Dee was so out of it that he couldn’t even have any speaking lines.

It doesn’t matter that all of the high school students were all clearly in their twenties — heck, PJ Soles — the immortally named Riff Randell — was nearly 30, and Clint Howard was already balding.

It doesn’t matter that a lot of “dirty” stuff was problematic, even in 1980.

It doesn’t matter that a high school student professing his or her love for the Ramones in 1979 — like me — was more likely to get beat up than be a cool kid.

It doesn’t matter that people would have actually purchased their tickets for that show days or even weeks prior to the actual show instead of lining up that afternoon.

It doesn’t matter that on any semi-objective cinematic level, Rock ‘n’ Roll High School is a terrible film. Because it knew all of the reasons it was terrible, and it didn’t care. In fact, I would argue that any film that cast a woman who danced onstage with the Velvet Underground as their anti-rock crusader knew exactly what they were going for. And it’s right there in the chorus of the song the Ramones wrote to be the title track.

And I remember seeing it as drive-in film with Neil Young’s Rust Never Sleeps, while sharing a 12-pack with Tim, because that’s the perfect way to see it, and I remember being blown away by what was inarguably the best part of the whole thing, the Ramones concert that was the centerpiece of the film on pretty much every level.

Weirdly enough, listening to either version of “Rock ‘n’ Roll High School” — the one from End of The Century or the original version recorded by Ed Stasium — isn’t nearly as much fun as watching the film. Despite the supersonic souped-up surf punk riff and the immortal teenage lyrics, “Rock ‘n’ Roll High School” is almost trying too hard, like they’re almost going through the motions.

It gets over because those motions — Marky’s big drumbeat, Johnny’s guitar, Dee Dee’s harmonies, and the modulations — are always great, but Joey feels a little bit off, like he knows we know that he’s playing a character. And cares about that fact. I mean, Joey’s often playing a character, but it’s usually larger than life, and in the case, it’s smaller than life.

And maybe that’s why they sat on this version for nearly a decade: Phil Spector remixed the version on the soundtrack — which seems to have left the space-time continuum — and they fully re-recorded it for End of The Century, so this version didn’t come out until 1988’s Ramones Mania.

Why is this Ramones song different from all other Ramones songs?
While the Ramones remixed or re-recorded songs — “Sheena is a Punk Rocker” and “Bonzo Goes to Bitburg” are the most famous examples, I would say that the difference between the End of The Century version and this version are pretty drastic. They dispense with the “rock, rock, rock n roll high school” over Marky’s drums bit at the beginning, and add extraneous guitars to boot. And, of course, that’s the one they made the video from. And even weirder, they basically rewrote it as “Touring” in 1981, recorded it for Pleasant Dreams, and then did another version of “Touring” for 1992’s Mondo Bizarro.

Oh, and its the only Ramones song to be the title track of a film that was also centered around the Ramones.