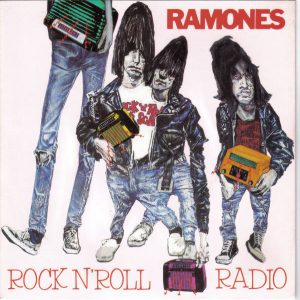 That said, early 1980 was a weird time for punk rock, so the Ramones were just doing what The Clash, Blondie, Talking Heads, The Jam, etc were doing: trying to find something new to do in lieu of breaking up. It just really didn’t work all that well.

Except for this song, of course, in which Joey’s chant of “rock n roll radio, let’s go” somehow outweighed the cheesy sax riff and, OK, pretty cool organ sound that dominated the rest of the song. Also, I’m a sucker for a song that lists other songs and artists, and “Do You Remember Rock ‘n’ Roll Radio” definitely had that.

Well, actually, no. I was 17 years and a senior in high school, hopelessly in love with rock ‘n’ roll, but all of that stuff predated me. However, I loved the couplet “it’s the end of the 70’s / it’s the end of the century,” which I thought was pretty funny, because the year 2000 seemed light years away. And coming up next was a verse that completely spoke to me.

Do you remember lying in bed
With your covers pulled up over your head?
Radio playin’ so no one can see
We need change, we need it fast
Before rock’s just part of the past
‘Cause lately it all sounds the same to me
Oh oh oh oh, oh oh

Now this? This was a thing to which I could relate. I totally secretly listened to the radio as an insomniac kid, I totally got what Joey waas on about, and it — as well the effortlessly great melody — was enough for me to love “Do You Remember Rock ‘n’ Roll Radio?” I also loved the irony of Joey Fucking Ramone complaining that all the music sounded the same.

Why is this song different from all other Ramones songs?
I think that’s pretty obvious: the sax riff, the carnival organ, the utter burying of Johnny’s guitar. It was the first Ramones song that didn’t really didn’t sound like the Ramones.