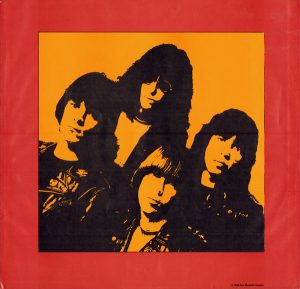 The plaster’s falling off the wall
My girlfriend’s crying in the shower stall
It’s hot as a bitch, I should’ve been rich
But I’m just digging a Chinese ditch

Said lyrics, Dee Dee’s answer to Lou Reed’s “Heroin,” were written at Debbie Harry’s apartment back in ’77 — as was the fashion at the time — (though I’ve also read it was Chris Stein’s apartment, which is far less glamorous) and given to the Heartbreakers, cos Johnny didn’t want to do a song about hard drugs. Three years later, things had changed, as the songs were drying up, and their version just worth it for the speedy tempo, as played by Marky, who of course had played with Richard Hell in a previous life, the guitar leads — probably played by Ed Stasium — and the way that Joey sings “dee-itch.”

And in any incarnation, the chorus remains a pretty good object lesson of the tendency for smack to ruin lives.

Why is this song different from all other Ramones songs?
I mean, given that “Chinese Rock” is the only song ever co-written by Dee Dee Ramone and Richard Hell — even if Hell only contributed a couple of lines — that makes it pretty much unique in just about every way.