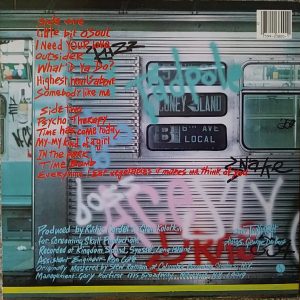 As is often the case, it was Joey who sold the song, alternating between quick chants of “psycho therapy psycho therapy” and long drawn out “psyyyyyy-co therr-aaaaaa-peeeee”, creating a nice tension with the fast-

And then, of course, there’s the video — set in a mental institution — which was weird and offensive enough to get shadowbanned on MTV, not helping either the song or the album’s chances of finally being the Ramones big breakthrough. I remember seeing it on Night Flight, and being suitably grossed out / intrigued by it.

In any event, the video did feature the Ramones third drummer, Ritchie, who joined the band after Marky was tossed out because of his drinking issues, though it seems like everybody involved pretty much knew that Marky would be back, though it would take several years.

Why is this song different from all other Ramones songs?
It’s the last of their great songs about mental health issues. And while obviously psychotherapy in and of itself isn’t as drastic as, say being sedated or lobotomized, you couldn’t tell that from the song.

In any event, the irony was that as those songs dried up, the album titles in the late 1980s started being things like Halfway to Sanity and Brain Drain, callbacks to an era long gone.