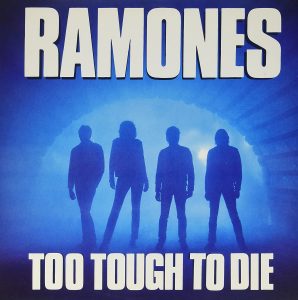 Kicking off with rolls and double backbeats over a droning lead guitar, and then settling into surf-rock riff, “Daytime Dilemma” featured some great vocals from Joey on the verses.

The repetition of “happy home” is sublime, as is his stretching it out on chorus, letting his voice slide from smooth to rough and back again while Ritchie just kills out throughout it.

And because there were no more rules anymore, “Daytime Dilemma” had not one but two bridges, the first, featuring a Phil Spector beat breakdown, and the second one at full speed, but with a stop time piano glissando after a quick build. After that it was all chorus, Joey belting out “the dangerrrrrrrrs / it’s the dangerrrrrrrrrs” over and over again while a high-pitched backing chorus chanted “the daytime dilemma ahh-ahh” in the background.

It was glorious, and while it was the kind of song that was unimaginable for the Ramones in their heyday, it still killed me, and I played it all the fucking time on KFSR.

Why is this song different from all other Ramones songs?
At 4:32, it’s nearly the length of three “Judy is a Punks” (Judys is a Punk??”), and is the longest Ramones song that I’m writing about. Not to mention that it has two bridges which are completely different from each other.