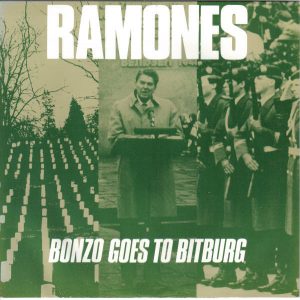 For you kids, “Bonzo” was a derogatory term for Ronald Reagan, who was the President of the United States at the time, but — as an entertainer who decided not to “stay in his lane” — had previous starred in a film called Bedtime for Bonzo, though he did not play the titular character. “Bitburg” was a West German cemetery where Nazis were buried.

You’ve got to pick up the pieces, come on, sort your trash
Better pull yourself back together, maybe you’ve got too much cash
Better call, call the law, when are you gonna turn yourself in? Yeah
You’re a politician, don’t become one of Hitler’s children

During a visit to West Germany, Reagan went to Bitburg, and then defended his actions by basically both-sidesing the Nazis, saying that the ones buried there were “were victims, just as surely as the victims in the concentration camps.” Erp. Joey was Jewish, of course, and he had some opinions on the whole thing:

With producer Jean Beauvoir polishing Johnny’s guitar to diamond hard, and then adding glockenspiels on top, “Bonzo Goes To Bitburg” was as angry as any hardcore song, while still soaring sky-high, riding tough on its ongoing contradictions, like Dee Dee’s gorgeous backing vocasl conflicting with a pissed-off Joey.

In an era where the President does and says incredibly shitty things at a dizzying rate — whoops, there goes another one — the inciting incident of “Bonzo Goes to Bitburg” probably seems hilariously trivial. But it didn’t to Joey, and after a thrilling modulation, Joey has one last thing to say.

“Bonzo Goes to Bitburg” came out in the U.K. in June, 1985 — Sire didn’t release it here as a single — and as much as I’d like to report that it was a massive hit single there, of course it wasn’t. Only on college radio, full of the target audience for this kind of bile, did it find any purchase.

Why is this song different from all other Ramones songs?
While the Ramones had always flirted with politics in the subtext — and shit, there was ironic Nazi imagery on their debut — and on songs like “The KKK Took My Baby Away” and “Howling at The Moon (Sha-La-La)“, the text, this was most explicit political song they would ever write.