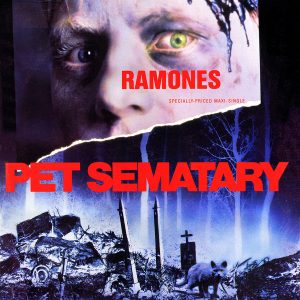 After “Bonzo Goes To Bitburg,” however, their studio albums suffered from that lack of inspiration. And while I enjoyed Joey’s big anthems about belief — and the clever video that went along with “Something to Believe In,” — as well as some of the punk-pop tunes they occasionally churned out, nothing really stuck. Except for the cheesy ass song they wrote for a long-time fan’s film. That long-time fan, of course, was Stephen King, and their title track for the film made from Pet Sematary — the last King book this non-horror fan ever read — was an unexpected hit.

Featuring spooky gothic keyboards over Johnny’s expected roar and big drum rolls, what put “Pet Sematary” over was the chorus, which was equal parts goofy and catchy:

And honestly, who could argue with that.?And yeah, “Pet Sematary” is overproduced by half, but with a suitably spooky-funny not spooky-scary video, it actually got both MTV and radio play.

Why is this song different from all other Ramones songs?
It was their highest-charting U.S. song, making it all the way to #4 on the relatively new Modern Rock charts. And while 30 years later nobody would put “Pet Sematary” at the top of most popular Ramones songs, it was nice to see them have any kind of success, and it probably fueled the next 9 years of their career, for better and worse.