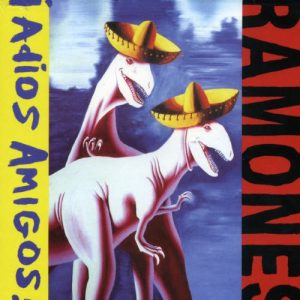 Hmm, maybe I was paying more attention than I thought. I mean, I could never fully ignore the Ramones, especially as the culture kinda sorta caught up with them — models wearing Ramones t-shirts and all that — in the post-Nirvana bloom.

That said, I’m pretty sure that I’ve never heard their final album: 1995’s Adios Amigos! I mean, of course, outside of the dynamite Tom Waits cover that kicks it off. A song that was tailor-made for the Ramones.

Weirdly enough, when Waits recorded it on 1992’s Bone Machine, he titled it “I Don’t Wanna Grow Up,” but the Ramones explicitly called it “I Don’t Want To Grow Up,” kinda showing just how much they had grown up. Didn’t matter, of course, not when they got to the superpowered final chorus.

With a guitar solo that replicated the melody — no doubt not played by Johnny — the Ramones find contrast their elemental power with elemental melody of Waits’ song, showing that they could still Ramonesize a song and create something new in the process.

Why is this song different from all other Ramones songs?
I was going to say that it was the only Certain Song performed by both the Ramones and Tom Waits, but Waits returned the favor with a gorgeous, sparse version of “Danny Says,” so that can’t be it. Instead, lets just say that the Ramones never shied from being a covers band, long after that was out of fashion, and “I Don’t Want To Grow Up” was their last great cover.