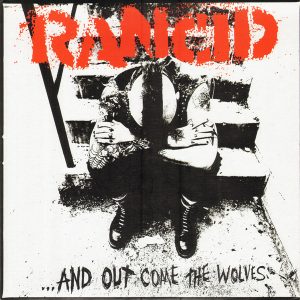 So let’s address The Clash part, first. As anybody who has paid any kind of attention to me for the last 40 years probably knows, The Clash were a life-changing band for me in 1978, and in 2020, I still think about their music all the time, even though circumstances have conspired to keep me from listening to a lot of it recently, it will always be a part of my soul.

So you’d expect that if someone says that a band sounds like the early Clash, I’d be all over it. Right? Like I am if bands like R.E.M., the Velvet Underground, Hüsker Dü or the early Who are invoked. But not the early Clash. For one thing, what Strummer & Jones (and Simonon) put together was so specific, so sui generis that even they realized they need to try not to repeat it.

And, to be truthful, over the years, I don’t recall a lot of bands trying to use it as a base. Maybe Channel Three? Possibly others. So in any event, given that I would have read about the first two Rancid albums before actually hearing them, I probably figured whatever. It was only hearing their big radio singles, probably “Time Bomb” on Live 105 in San Francisco, as well as reading the reviews that caused me to try them.

The mid-90s was a weird for Cali punk: newish kids Green Day broke huge, dragging the Offspring along, as well as lifers Bad Religion and others. But for me, …And Out Come The Wolves killed all of them. And while the buzzsaw riffs and shout-along vocals of Tim Armstrong and Lars Frederiksen weren’t breaking any ground, I didn’t need any ground broken. Not when they were kicking out songs like “Lock, Step & Gone,” which started out with a pair of guitars, er, clashing against each other, and the incredibly catchy call-and-response chorus.

Like Strummer and Jones, neither Tim Armstrong or Lars Frederiksen have conventionally great voices, but their unconventional voices sound great against each others, and with drummer Brett Reed providing real momentum on the verses, it’s utterly irresistible, especially when they interrupt the guitar solo in the middle to let bassist Matt Freeman do a few quick runs, just because why not?

A song like “Lock, Step & Gone,” encapsulates the why not I love about Rancid: for all of the rough guitar, rough vocals and rough lyrics, there’s also a generosity of spirit there that both guides and transcends their music. Kinda like you-know-who.