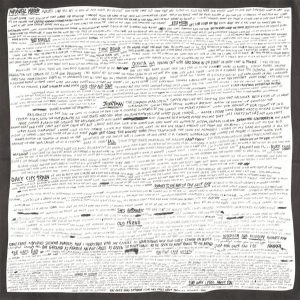 Which is a great contrast to Frederiksen’s vocal on the chorus.

There’s a lot of great shit happening on this chorus: the contrast between Frederiksen’s clipped “you” and his joyous final “you-eoyoou-eoyou-eyou-eyuou”; followed by both of them singing rough and ready harmonies on the repeated “junkie man, tell me what your story is.”

The second time around, they rouse the junkie man enough to get at least part of his story, and it’s voiced by one of the OG literary junkies: Jim Carroll. According to an MTV News report at the time, he was taping at Electric Ladyland while they were finishing some overdubs, and they convinced him to write and record some poetry that he then recited over the breakdown. Given that said poetry included the eventual title of the album, one wonders what they were originally going to call it.

After the breakdown, they launch into one final verse and chorus and after that, “Junkie Man” careens into a halt.