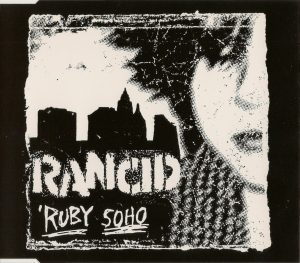 That said, the songwriting — Armstrong, Frederiksen and bassist Matt Freeman — was so spot on, once they got on the radio, they were hard for me to resist. Which is why I ended up buying this record in the first place: so I could listen to a song like “Ruby Soho” as much as I wanted to, not matter how much they were playing it on Live 105.

Starting off with big, banging power chords, before settling down into an almost quiet rumbling, “Ruby Soho” was one of those songs where you just waited for the chorus, so you could shout along with the band. Which is good, because while the lyrics were about a girl who falls in love with a rock star. Or punk star, I guess. Which might even be bassist Matt Freeman.

He’s singing and she’s there to lend a hand
He’s seen his name on the marquee but she will never understand
Once again he’s leavin’ and she’s there with a tear in her eye
Embraces with a warm gesture it’s time, time to say goodbye

And, of course, there isn’t even an ounce of condescension in the words, and in fact, you get the impression than rather than withdrawing and licking her wounds, she’s using the incident as a spur to get on and do something with her life. Or at least that’s how I choose to see it.

It ain’t much on paper — though I do love the juxtaposition of a key Missing Persons song title with a fictional Joe Strummer girlfriend name — I know, but when they all come in screaming it at both the same and just slightly different times, it’s so fucking thrilling. Just a classic punk rock chorus for a classic punk rock song, especially at the end where they start mixing up the “destination unknown” with the “Ruby Ruby Ruby Ruby Soho” over and over and over.