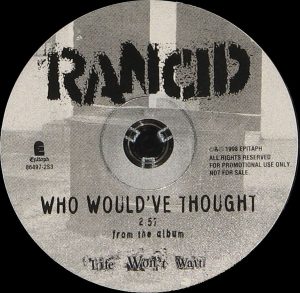 But it’s still a pretty great fucking record, especially on the back half, which started off with this love song from Tim Armstrong his then-wife, Brody Dalle.

“Who Would’ve Thought” starts off dreamy, Armstrong singing the chorus all by himself over a couple of lazily meandering guitars:

It’s a great chorus, even if Armstrong never bothers to answer the first two questions, because it’s implicit in the “but it was” in the final line, and also in the rest of the song.

A red flag and your body wins
Or a snake bite, gotta start again
So I’m fucked up, I’m watching TV all day
I don’t wanna see what Ricky Lake’s gotta say
And it hits me when I’m alone, I’m an angry man
I start singing to myself, I got dealt a shitty hand
With all these feelings my heart could explode
So is it not fear, no not at all

By that time, of course, “Who Would’ve Thought” has fully kicked in — Matt Freeman’s bass taking the lead on the verses — and on the rest of the choruses are full of big-chant harmonies and “ahhhhhhhs”, and after the third one, a long, stringy Lars Frederiksen guitar solo that leads immediately into this:

Honestly, with it’s quiet opening, and massive pop hooks, “Who Would’ve Thought” felt more more like a big radio single than anything from …And Out Come The Wolves, but of course, it was way too late, and if it got any kind of radio airplay, it wasn’t nearly enough.