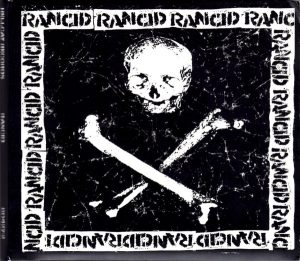 Books on Emerson, books on Thoreau
But all I read was maps of the road
I was three thousand miles away from you
All the while I was twenty-two
What do you do to know who you are?
The best way for me to drop out on tour
You went up to New York to go to school
To secure the roll with your parents

Freeman’s vocals were at the heart of my favorite on Rancid, “Black Derby Jacket,” written by Tim Armstrong, but clearly from Freeman’s POV, which was probably easy cos they’d known each other since they were kids, when they would wear the titular jackets to shield from the East Bay cold.

I never needed much, I never liked to loom
But a gesture can get me from across the room
The first night we talked until while the sun caught up
Transparent people melting all around us
You left in a plane, I left in a van
Played nightclubs, house parties, and auditoriums
Saw Germany, England, Italy with my band
I know you better than your new friends

So if Armstrong sang with a mush-mouthed word-swallow and Lars Frederiksen could do entire stadium shout-alongs by himself, then Freeman was a classic hardcore growler — as an amazing YouTube comment on this song from someone called “kingleper” put it: “I grew a beard from listening to Matt’s singing” — who totally and utterly nailed the torrent of words Armstrong wrote for him about a relationship defined by distance.

Also torrential: the music — I mean, duh! — lead by drummer Brent Reed, who pretty much plays lightning-quick surfabilly rolls on his snare drum pretty much the entire fucking time, only switching to his hi-hat after the monumental full-kit rolls that led to the chorus.

The first two times they play that chorus, they speed right into it, and slow down to catch their breath while Freeman pummels his bass a bit while catching his breath to start singing. But on the last chorus, everybody slows down, and it’s just Freeman and his bass and it’s — well, tender is probably the wrong word, so how about — heartwarming, to say the least. The aural equivalent of the opening of the video when the camera goes to Tim Armstrong, and he directs it to Freeman.