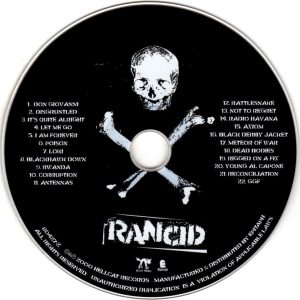 But after the second chorus, “GGF” takes a turn, as Armstrong ruminates about running into a childhood friend — Big L, who used to ride his sister’s pink 10-speed to meet Tim at the track when they were kids — who isn’t doing all that week. And Big L, who isn’t doing so well either teasing, or worried about Armstrong getting too big for his britches, or genuinely worried, always asks Armstrong if he remembers:

He said, “Tim, Tim, don’t you remember me?
Way back, from 1973”
And every time I see him
He has to remind me
Like I would ever, forget Big L

And after that, Armstong describes Big L as being “gone, like a flash,”, but leaving it open as to whether or not it means that Big L has died, or just run away. Either way, it’s got real pathos, and immediately afterwords, Lars Frederiksen cranks out a twisty, winding hook on his guitar and Armstrong signs off, literally.

And then, they’re gone, like a flash. And while this is the last of the Rancid songs I’m writing about, that doesn’t mean they didn’t keep making great songs: all of the records they’ve made this century — Indestructible, Let The Dominoes Fall, Honor is All We Know and Trouble Maker — are worth checking out. But I’m guessing you already knew that.