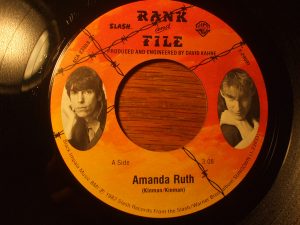 “I started this damn country band,” Ryan Adams (yes, I know) sang on the first Whiskeytown album, “because punk rock was too hard to sing.” And while Adams was being somewhat facetious, even while validating my life-long truism that some of our best musicians play hardcore, he was positing himself as heir to a grand tradition that arguably started with Rank and File.

Prior to teaming up with drummer Slim Evans and ringer Alejandro Escovedo, Chip and Tony Kinman (RIP) were in the legendary San Francisco punk band The Dils, where they wrote songs like “Class War” and “I Hate The Rich,” as the kids did back then. But the Kinman brothers were always musically restless, and so as the rules for hardcore got ever more stringent, the Dils broke up, probably because punk rock was too easy to sing. Cos Chip and Tony Kinman could sing anything: their harmonies were otherworldly.

Luckily, after The Dils broke up, Chip had already met Escovedo, and they started a band together, based out of Austin, Texas, and Tony decided to join. And so during a time when the rock ‘n’ roll snob joke about country music was the Blues Brothers “we play both kinds of music, Country and Western,” they landed upon doing country with a punk edge, and when they stuck the brotherly harmonies of the Kinmans and the tough, moody lyrics on top of it, they and ended up putting out one of the all-time great Cowpunk/No Depression/Alt-Country/Americana debuts, 1982’s Sundown. Actually, forget the “debut” qualifier: nearly 40 years later, Sundown still fucking rules on every level.

Released on the legendary Slash label — who had had already released classics by X, The Blasters and The Dream Syndicate — Sundown takes about 15 seconds to kick in, as opening track “Amanda Ruth” launches out of the gate with Escovedo’s inversion of the “Oh, Pretty Woman” riff over Chip Kinman’s sly ska-like rhythm guitar, Evans doubling down on his snare drum and — oh my god, those harmonies. Did I mention the Kinman brothers’s harmonies yet? Tony’s baritone and Chip’s tenor, just fucking perfectly singing the title over and over again.

After which, Tony describes a star-crossed relationship. Or, more likely, a relationship attempt.

And then, wham, without a beat, they slide back into the harmonized “A-mannnn-daaaaaa / A-manda Ruuuuuuuuuuuuth”, followed by Tony describing another date where his cool intentions once again went awry.

After that second verse, Chip and Alejandro play the opening riff in unison, after which Chip then takes a really cool, lowdown solo that goes on longer than you’d expect, nearly bringing the song to a halt, but Tony’s got one more double-entendre filled verse to go, which kinda explains why he’s going to all of this trouble in the first place.

She burns her biscuits and her gravy is strange,
Can’t fry a chicken in a microwave range.
Her salt’s tasty, her sugar’s sweet
No she can’t cook
But she’s got something to eat

Of course, in 1982, a band like Rank and File wasn’t going anywhere on the charts. Except for college radio, of course: even though Sundown had been out a few months prior to KFSR going on the air, I remember it being a relatively huge record for us in late 1982 and early 1983. Or maybe it was a big record for me, easily one of my top ten albums of 1982, and — more importantly, along with Waylon Jennings Greatest Hits — the first flat-out country album I ever loved. There would be more.

Oh, and given that the Kinman brothers’s harmonies — did I mention their amazing harmonies? — bore more than a passing resemblance to the Everly Brothers, some of you might remember that the Everly Brothers did a pretty good cover of “Amanda Ruth” featuring legendary British hey-it’s-that-guy guitarist Albert Lee. There’s even a video, but I didn’t link to it, because it’s too 1980s male-gazey by half, though at least the actress who plays the titular character is age-appropriate. Put it this way: on every level, The Everly Brothers version of “Amanda Ruth” is way better than Ringo’s cover of “Golden Blunders,” so there’s that.