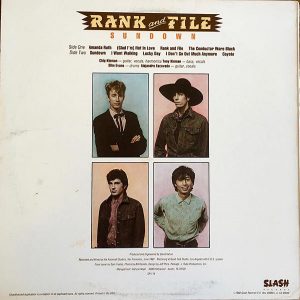 I got to see Rank and File in concert. Hell, I think I even got to meet Chip and/or Tony Kinman. I know for sure I saw them March of 1983, and they were playing down the Ikeway at the Old Town Saloon and Dining Emporium. What I think happened that Brad picked them up in his 1951 Studebaker to bring them back to the radio station for me to interview them.

Unless it didn’t. It was nearly 40 years ago, and the only I know for sure is that I got to see the show (thank the gods for my fake ID) (actually, thank Jim M, who changed my birth month from “11” to “01” and added 10 crucial months to my age) and they got to see Brad’s Studebaker. However, I didn’t write down that I actually go to interview them, so I probably didn’t, given that I’d noted just a couple of weeks earlier that I’d interviewed Tom Gray of the Brains, and holy cow, did this post go off the rails in record time.

UPDATE: some forensic work involving discussing this with other old people, plus my calendars from the time and the DEAD AIR DIARY credits from June, 1984 would seem to indicate that I interviewed Chip Kinman before Rank and File’s 1984 Star Palace show, which happened around the time of the R.E.M. show that everybody remembers. So I got to see them twice.

OK, now that’s relatively settled, here’s one thing I do know for sure: “Coyote” was the song that got me into Rank and File in the first place, ending the album with a glorious, anthemic jam about a serious topic: illegal immigration. Starting with a massive Chip Kinman harmonica riff punctuated by guitar Alejandro Escovedo guitar stabs, “Coyote” takes a bit of time before getting to any of its words, and even then, starts with its chorus; Chip and Tony Kinmans’ vocals utterly soaring through the stratosphere.

“Coyote,” of course, is the colloquial term for the people who smuggle people across the border, often to jobs where they’re ill-paid and ill-treated, as Tony Kinman sings about in the first verse.

They asked the rancher’s son what happened to the lad.
“Oh, I don’t know, but we didn’t do nothing bad.
Now what’s all the fuss? They ain’t like us.
They don’t matter anyway.”
We took their hands and we bound them up with wire.
When the sun went down, they felt the fire.

After the second chorus, there’s a remarkable instrumental break, with Chip taking off on a harmonica solo, followed by a guitar solo that let’s say is by ringer Alejandro Escovedo, who’d also been playing stellar guitar throughout the album. Then, after that, “Coyote” does the weirdest thing: it breaks down into what could almost be described as a live stop-time dub break, with Slim Evans skanking up the beat, Tony wandering around his beat with the bass, while Chip’s harmonica slams against it all at weird intervals. After that, another guitar solo leading back up to the chorus.

On one hand, this weird break is completely extraneous to the song. On the other hand, it completely makes the song, which is otherwise just a couple of verses and a couple of choruses. It gives it length, and it gives it the musical heft that matches the second verse, which might even be sadder than the first verse.

The sun pushes him down, the moon pulls him up.
He’s all alone and he cries like a pup,
“My mother, my sisters, and I don’t know
as the cold wind blows,
I want to go home but I’m too far north,”
and the cry comes forth, “Hiyo, hiyo,

Equal parts brutal and brilliant — and sadly, still apropos to this day — the unsparing lyric of “Coyote” mixes with the soaring chorus and the experimental middle section to create one of the most beautifully political songs the 1980s ever gave us.