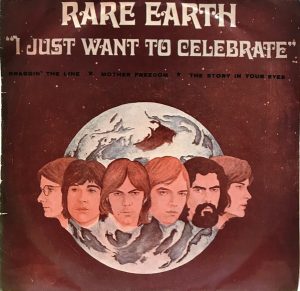 In any event, Rare Earth had the good fortune to be one of the first rock acts to be signed to Motown, and almost instantly made it to #4 with their perfectly serviceable version of the Temptations immortal “Get Ready.” Well, the single was perfectly serviceable; the album track was over 21 minutes long, and I’m sure I heard it on KFIG once and ignored it forever.

In any event, much much better was 1971’s party anthem, “I Just Want to Celebrate” with led with its chorus, and 50 years later, in the middle of a pandemic that chorus rings strangely resonant.

Though “celebrate” is wayyyyyyyyy too strong of a verb for what’s going on right now. Maybe “acknowledge,” or “suffer through”??

That said, it’s always been hard for me to resist this cocksure piece of funky hard rock that was neither too funky nor too hard rock. “I Just Wanna Celebrate” gets by because it sounds like its title, a celebration. The kind of celebration that always threatens to go out of control — random “yeah yeahs,” harmonies coming from nowhere; weird breaks; wah-wah guitars and percussion popping in and out of nowhere — but of course never does. Then at the end, the song itself comes to a complete stop, just so they can have the drums start it back up so they can sing the title over and over and over and over.

And I can tell you this, though: “I Just Wanna Celebrate” sounded fucking awesome on the early 1970s radio, a song that I always enjoyed whenever it came on KYNO or Rock 96 FM. Plus, extra points now for the drummer being the vocalist!

“I Just Want To Celebrate”