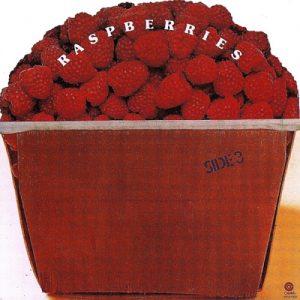 I hope that Doc doesn’t kick me out of the band for this confession, but I don’t think I’ve ever heard any of the Raspberries four studio albums as actual, you know, albums.

I mean, in 1981, I got their 1976 Raspberries Best compilation, and given how many great songs it collected and their rep as an Eric Carmen-driven singles band, I figured that I’d pretty much nailed it. In any event, the fact that the Raspberries put out their first album in 1972 and had enough killer singles for a fantastic best-of in 1976 — two years after their last album — says something about the early 1970s.

And so “Tonight” opens with a classic, staccato guitar riff that blantantly stole from “I Can’t Explain” — though not as blatantly as they stole from “Pure and Easy” at the end of “Ecstasy” — after which Eric Carmen lays on the thirst.

Sure, Carmen is dipping into problematic territory here — though definitely not as problematic as his twitter feed, sorry to say — but suffice it to say I don’t think this is a “Stray Cat Blues” situation, and besides the chorus wipes it all out, thanks to drummer Jim Bonfanti, who alternates rolls with a tom-driven double backbeat underneath the usual pop genius on the chorus.

After that, Wally Bryson just takes off on guitar, and they’re having almost forget their trying to write a hit record here, and even after they reign it in and essentially repeat the first half of the song over again, whatever control they had in the first half in the song is completely gone, with both Bryson and Jim Bonfanti, er, filling every hole in the song that they possibly can. In fact, Bonfanti is so amped that he keeps going after the song has finished.

In any event, even though it had only been 18 months since “Go All The Way” had stormed the top 5, “Tonight” was a maybe a bit too enthusiastic for its own good, and stalled out prematurely at #69 on the Billboard charts. Nice and fitting, sure, but definitely disappointing for Carmen, whom as we’d soon find out, was in it for the hits more than anything else.