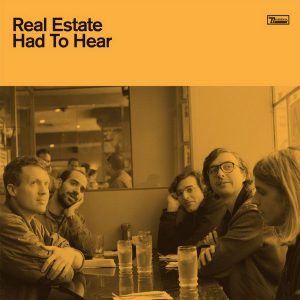 Needless to say, it wasn’t fun, and in fact, it was the beginning of a run of shitty luck that would last for nearly two years, because that’s just how life works, right?

In any event, Real Estate’s 3rd album, Atlas, came out right around that time, and it turns out to be one of those pieces of pop culture that got me through that weird, difficult time.

And one of the key tracks was the opening track “Had To Hear,” featuring an amazing jangly hooky riff from lead guitarist Matt Mondanile that they know is so great, they let him basically repeat it a few times before the rhythm section comes in. But even when Martin Courtney starts singing, Mondanile continues to dance around him with his guitar.

It’s an absolutely exquisite guitar part, like what Johnny Marr did on the first couple of Smiths albums, setting up and framing the vocals and the songs melody, but also stealing the show at the same time. Near the end Mondanile goes off on an extended guitar solo, echoing and ringing, and it is fantastic.

During that dark spring, every time “Had to Hear” came up in the mix, I was totally and utterly transfixed by it, a tiny respite from the river of shit I was wading through.

“Had To Hear” Official Video


“Had to Hear” Live at the Pitchfork Music Festival, 2014