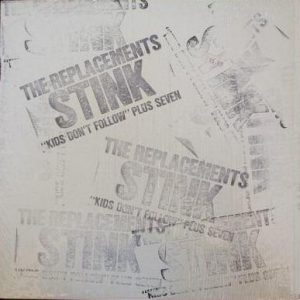 In a weird way, Stink is much like Don’t Tell a Soul: the sound of a band trying wayyy too harrrrd to fit in. That what they were trying to fit in with with polar opposites is of no matter: in both cases the end result was a record that didn’t quite work for me.

But the sound of a band trying too hard is not why I love the ‘mats, and while I know a bunch of folks enjoy the energy level of Stink, I think it’s a step backwards from Sorry Ma, Forgot to Take Out The Trash. Which isn’t to say that I hate it, but rather — to me! — most of the songs don’t rise to the level set by the best songs on the previous record.

That said, I do really enjoy “God Damn Job,” which like The Sex Pistols, recontextualized Chuck Berry at insanely fast speeds while Paul screamed the lyrics:

And while there’s some great guitar from Bob Stinson, and a nice piece of production where a bunch of overdubbed Paul Westerbergs (Pauls Westerberg?) all scream “GOD DAMN IT!” at the same time, but that’s pretty much it. Let’s put it this way, I think that “God Damn Job” is the best song on on Stink, but I want more from the Replacements than just thrash, and the just thrash songs on both Hootenanny and Let it Be are even better.