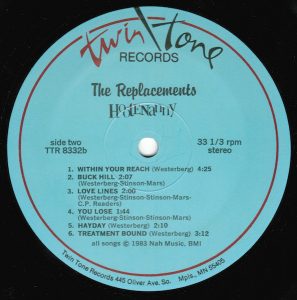 The fast blues shuffle “Lookin For Ya” had been kicking around since even before Paul hooked with the rest of the ‘mats, but for whatever reasons, they didn’t record it for Sorry Ma, Forgot to Take Out The Trash, but did do a version of it for a compilation album in early 1982.

In any event, for reasons, I guess, they decided to de-thrash it, jazz it up and have Paul read from the salacious personal ads of the Minneapolis City Paper alt-weekly of Wednesday, October 13th, 1982. And the end result was hilarious, mixing straight-up personal ads with Paul’s asides.

It’s really the asides that end up killing me, especially after this one:

And then the whole band (or maybe just an overdubbed Paul) join in with:


After that, there’s a reference to John Lee Hooker, a jazzy solo from Bob — who probably kinda enjoyed exercising his Steve Howe licks — while Paul continues.

But probably my favorite bit of his singing is near the last time around.

In one way, this combination of found lyrics and an existing backing track is somewhat akin to Michael Stipe singing the liner notes to an old gospel album on “Voice of Harold,” but the difference that Stipe almost never sounded like he was above what he was singing, getting more and more into it as he progressed, while Westerberg started with a sneer and ended with proclaiming it “all a bunch of shit.”

Like the title track and mostly stolen “Mr Whirly,” the repurposed personal ads in “Lovelines” kind of embodied the ethos that the obviously re-purposed — by Grant Hart (R.I.P.) — album cover promised: creating the brand-new out of what already existed. Also: at some point in the mid-1980s, Kirk ended up owning the original Hootenanny album from whence the cover was repurposed, which as also awesome and funny.