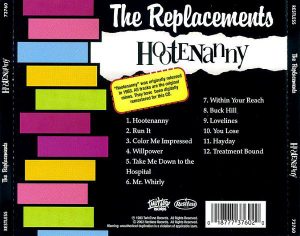 Label wants a hit, and we don’t give a shit

The self-mythologizing song has always been a rock ‘n’ roll staple, done by countless bands from The Who to the Clash to Too Much Joy to the Hold Steady, and with “Treatment Bound,” Paul Westerberg entered the Replacements into the canon, with a typically funny and unstinting look at exactly where the ‘mats were and where he thought they were going.

And it wasn’t pretty:

We’re gettin’ no place fast as we can
Get a noseful from our so-called friends
We’re gettin’ nowhere quick as we know how
We whirl from town to town, treatment bound

Like the opening title track, “Treatment Bound” ended Hootenanny with what was obviously a piss-take, which I think in this case, was maybe an attempt to obscure the message, and stemmed from Paul’s idea to record it in the basement where they rehearsed, which resulted in a incredibly lo-fi sound. In other words, this was where the Replacements invented Guided by Voices!

First thing we do when we finally pull up
Get shitfaced drunk, try to sober up
There’ll be no pose tonight, no money in sight
Label wants a hit, and we don’t give a shit

And in fact, they eventually recorded a full studio version, as a countryish ramble, which would have been perfectly acceptable, especially in the context of the rest of the album. But it wouldn’t have been as perfect of an album closer, because the rawness of the sound ended up going perfectly with the honesty of the words.

Because we’re gettin’ no place, as fast as we can
We get a noseful, from our so-called friends
We’re gettin’ nowhere, quick as we know how
We whirl from town to town, Duluth to Madison
Treatment bound

In any event, back in the basement, with Paul playing an acoustic guitar, Chris playing the most rudimentary of beats and somebody (Tommy?) on what sounds like an accordion — or maybe a Mangus Electric Chord Organ — warbling along in the background, “Treatment Bound” sounds like its name, on its way to rehab, as if that’s gonna help. And in fact, and one point, it does stumble, but somehow doesn’t quite hit the ground, Paul pleading “keep going” to what was probably a bunch of shrugs.

Second thing we do is walk around
Go to the job or try to hold one down
There’s no mass appeal, Carton’s asleep at the wheel
Yesterday’s trash, too bored to thrash

And of course, at the time, I wondered just how much of this could be true, and it turns out, pretty much all of it, as we would find out later on, as they started touring more widely.

And them Paul shouts “Take it, Scotty” at, lets say, Bob, and then a falling (one presumes) beer bottle basically brings “Treatment Bound” to an unceremonious end, prompting this final exchange:

Tommy: What were the chords to that one part?
Paul: Fucked ’em up.

Given both the chaotic nature of Hootenanny — and the disfunction delineated in “Treatment Bound.” I honestly don’t think that anybody was prepared for what The Replacements would do next, which is release three of the greatest albums in rock ‘n’ roll history.