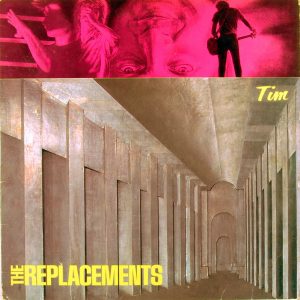 It was weird, the Replacements beating R.E.M. and Hüsker Dü to a major label, because it was always a crapshoot what would happen when an indie band made it to the Show. It’s just that you never knew what was going to happen. On one hand, X made the amazing Under The Big Black Sun as their debut for Elektra, but the Dream Syndicate made the underwhelming Medicine Show.

That said, I never had the automatic anti-major snobbery of some of my brethren. I mean, The Clash and The Who (not to mention Bob Dylan and Neil Young) made some pretty uncompromised music for major labels, and, besides. the Replacements were on the same label as the Ramones and Talking Heads. Even better, the producer on their new record, Tim — just one letter off from being the greatest album title ever — was an actual Ramone, and one of the chief architects of their sound.

Still, you never knew, did you? Especially since while the Ramones were proof that the shortest distance between two points was a straight line, the ‘Mats only ever found the second point by accidentally stumbling over it while drunk.

So what a relief it was when we put the needle on the record and the pair of chords that introduced “Hold My Life” came blasting out of the speakers, guitars roaring, bass rumbling, and drums pounding.

And then Paul Westerberg looked around and said “Well, well, well,” as if he was surprised to be doing it again, but here he is, so he might as well explain himself.

I bought it
Down on all fives
Let me crawl
If I want I could die
Oh, by my hand
Time for decision to be made
Crack up in the sun
Lose it in the shade

Turns out, he was surprised to be doing it at all. And so like at the end of “Answering Machine,” he ain’t doing so well, even if by this time it was old hat for Paul to sing about killing himself. But that’s OK, in late 1985, none of us were, either, which is why “time for decision to be made” (I always heard it as “decision” not “decisions”) — sung while the guitars were leaving more space than they strictly needed to — instantly resonated, but not nearly as much as the pre-chorus, which was both an offhand steal and a shitload to unpack.

I remember vividly how much this jumped out at me. There was an early 60s cartoon called “Tooter Turtle,” where a curious turtle asked a lizard wizard, cleverly called “Mr. Wizard,” to send him on some kind of an adventure. Said adventure always went south, whereupon Tooter inevitably called out “Help, Mr. Wizard!” whereupon Mr. Wizard would utter the magical phrase “Drizzle, Drazzle, Druzzle, Drome; time for this one to come home,” and bring Tooter home. The whole point of the cartoon seemed to be that it was better to not even try to improve your lot.

I think that Tooter Turtle was part of either Rocky and Bullwinkle or Underdog shows. Or it could have been something else. In any event, “Help me, Mr. Wizard!” also had a second life in little league baseball, as often when an opposing pitcher get into a sticky situation, the opposing players could be heard to shout, “Help me, Mr. Wizard! Get me out of here!”

And so, it was hard not to real Paul’s mangled incantation as a manifestation of his worry that he was in over his head, especially when followed by the chorus.

One thing was certain: he could still sing like a motherfucker, stretching out each word of “hoollllllllllddd myyyyyyy liiiiiifffe” to the exact proper length, while at the same time making you wonder if “lose it” means die or go crazy. Some fate either way.

After the second chorus, there’s a neat trick where Paul’s guitar starts echoing the “just might lose it,” which leads into a cool guitar solo from Bob Stinson, who was sadly already beginning to Brian Jones his way out of the band, and so was mostly overdubbed instead of playing with the other three.

That said, both of Bob’s solos on “Hold My Life” are pretty great, the first one getting interrupted by Paul screaming “just might just might just might” while Chris Mars tries to smash the song to bits, and the second one, kinda psychedelic and exotic, which brings the song to its end after Paul continues to plead “hold my, hold my” over and over again.

But what a difference a year made: even after the precursor of “I Will Dare,” we weren’t planning on Let it Be being as great as it was, but after Let it Be, each and every Replacements album — at at least Paul’s first two solo albums, for that matter — came with massive expectations, and not just commercial ones, but also the hopes and dreams of a fanbase that wanted to have yet another set of songs that spoke to us the same way the previous ones did.

Hell, Tim didn’t even have to be better that Let it Be, it just had to be nearly as good. And clearly, “Hold My Life” held out the promise that it was going to be.