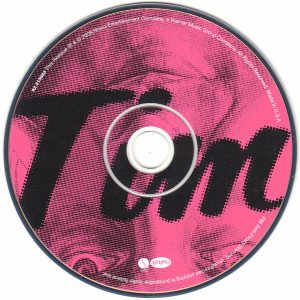 In any event, “Bastards of Young” starts side two of Tim off with an anthemic guitar hook, after after which Paul lets out an instantly-iconic guttural scream and lays into the first verse.

God, what a mess, on the ladder of success
Where you take one step and miss the whole first rung
Dreams unfulfilled, graduate unskilled
It beats pickin’ cotton and waitin’ to be forgotten

In Trouble Boys, Bob Mehr mentions that “Bastards of Young” was a set of lyrics that Paul worked the hardest on — more than one draft! — and it absolutely shows, so it’s too bad that the guitars are kinda flat on the verses. It’s possible that they were going for the Who-like dynamics they got on “Left of the Dial” and it’s also possible that they didn’t want anybody to miss Paul’s great words.

But they ain’t flat on the chorus, which — with the exception of “We’ll Inherit The Earth” — is as anthemic as The Replacements ever got, sabotaged ever so slightly by the guitars sounding like there’s a thin plastic sheet between them and your ears.

I was this many years old when I discovered that the chorus was “wait on the sons,” not “we are the sons,” though apparently Paul mentioned it in a 2010 interview (and Bob Mehr also mentioned it Trouble Boys) which I must have missed. I’m assuming that everybody else also heard “we are the sons of no one, bastards of young” which and let’s face it, that was way more fun for the fans to sing — especially since that’s exactly what we felt in the mid-1980s — that we were kind of a new lost generation, toiling in the shadow of the more glamorous Baby Boomers. But while the Baby Boom itself lasted in 1964, a supposed Boomer born in that year was 5 years old during Woodstock. So give me a fucking break; those of us born in the 1960s (and we’ll include Paul, who was born on the last day of the 1950s — after all, it was already 1960 in Asia and Australia) weren’t Baby Boomers, which is why the next verse gave us so much pleasure.

Clean your baby womb, trash that baby boom
Elvis in the ground, no way he’ll be here tonight
Income tax deduction, one hell of a function
It beats pickin’ cotton and waitin’ to be forgotten

I mean, going back to the chorus a second, I’m thinking that I’ve probably heard it as “we on the sons of no one,” which, of course, doesn’t make any sense at all, so I assumed that it was “we are,” because he kinda swallows “wait,” — and maybe that was part of my slight disconnect with “Bastards of Youngs:” I kept hearing the lyrics wrong, like on the bridge: “Willing to claim us / Ya got no wars to name us”, which to me is a cousin of one of my all-time favorite Simpsons jokes, which happens in the middle of Bart and Lisa watching the “I’m An Amendment to Be” cartoon:

BART: “What the hell is this?”
LISA: “It’s one of those campy 70s throwbacks that appeals to Generation-Xers.”
BART: “We need another Vietnam to thin out their ranks a little.”

But now, the fucking internet tells me that the real lyric is “Ya got no warrant to name us,” which, sure makes some sense — and not the last time I would mishear a lyric on this song — and it’s accompanied by some cool stop-time drumming by Chris Mars, but then there’s a guitar break where in the past Bob would just go fucking off, but instead, the guitars circle each other warily, so maybe Bob isn’t on the recording? In any event, there’s one more verse, and it’s a fucking doozy.

I mean, that’s just magnificent and universal, and doesn’t really fit the rest of the song, as he pivots from generations to families, but it didn’t even matter, not with Paul screaming “ya-hunnnnnnng” the way he was screaming it. And finally, the coda, which explodes in white light of Chris Mars drum rolls and feedback, while Paul screams “Hey, George” over and over again.

At least that’s what I thought at first, but then I realize that “hate yours” was what he was screaming, at least until I read that he was trying to fit “take it, it’s yours” into an increasingly smaller space.

In any event, while “Bastards of Young” is an unquestionably great song with one of Paul Westerberg’s strongest set of lyrics, I just feel like the recording does it a disservice. That said, it was a helluva lot of fun on Saturday Night Live, and even more fun on Live at Maxwells. So maybe it’s just me.