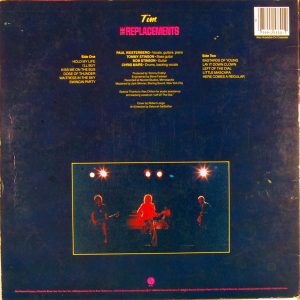 I actually wrote in my journal (the 1985 version of live-tweeting) the first time I heard Tim, and one of the songs that stood out for me on that initial listen was “Left of the Dial.” I called it my early fave, and wrote “and it’s gonna sound great there, too.)

And honestly, I can’t hear the grand opening riff without getting all of the feels. When the rest of the band kicks in, it’s a perfectly lethal combination of Paul and Bob Stinson’s guitars ringing and squealing guitars against each other, building towards that first verse where the guitars disappear leaving Paul singing over only Chris Mars either clacking his sticks together or against his rims and some gentle bass notes from Tommy Stinson, only to rev into full gear

It’s a master class in dynamism, alternating between loud and quiet and quiet and loud in a way that the Replacements truly hadn’t done before. It kinda reminds me of what The Who did on future Certain Songs like “The Good’s Gone,” “Substitute” and, yeah, “I Can See For Miles.” And, of course, that’s on purpose: according to Trouble Boys, that’s what Paul was trying to do for many of the songs on side two of Tim. And it worked. I literally cannot give a higher compliment than that, and had I known it when I interviewed Paul in 1985, I would have tried to spend the entire interview geeking out on how great the My Generation album was.

And so I loved when the louder part kept itself going going straight into the chorus, Bob’s guitars echoing the melody, Mars drums breaking things up, as Paul asked a question that might have meant something else to him, but only meant one thing to me.

Here’s the thing about being a college radio DJ in the 1980s: I felt connected to something bigger. Something potentially world-changing. It’s hard to explain, but a whole universe of bands were held together by nothing more than fanzines, apartment couches, alt-weeklies and college radio. But nothing less than, too. We had the sincerity and certainty of youth that all of these bands were better than most of what was being played on the commercial rock stations, and that we had a mission to get their music out to other people who would appreciate that.

This world was the backdrop for “Left of the Dial,” which is basically not really about any of the stuff I wrote about above as much as it is about a boy who met a girl — in this case, Lynn Blakey, who was touring with Let’s Active — he wanted to get to know more, but their respective lives took them away from each other, but because of this alternative world we’d all created, he still might get a tangible reminder of her art and her existence. And so, maybe he was wondering which side of the country Let’s Active happened to be on.

But that’s not how I took it. I took “what side are you on?” as an existential question. Were you on the side of the underground or weren’t you? Were you listening to the — well, not right — correct side of the dial? The left side of the dial, because radios used to have their numbers horizontally, and the left side was where all of the public radio stations with lower numbers — and college stations were largely public stations, getting money from our schools and the audience — congregated. Our side of the universe.

Weary voice that’s laughin’, on the radio once
We sounded drunk, never made it on
Passin’ through and it’s late, the station started to fade
Picked another one up in the very next state

And then after the second the “on and on and on and on” guitar went on and on and on, they broke it up again, guitars crashing around Chris Mars, who is trying to break them apart with a Phil Spector beat, but only for a moment, because it’s more fun to kick back into gear while Paul screams “ohhhhhhhhh,” and now there is some serious motovatin’ going on, and now anything can happen.

And then it does: Paul slams back into the opening riff, Bob swings around, backing him up, and . . .

(hang on, gotta gather myself)

. . . and it’s at this moment that “Left of The Dial” becomes the greatest song ever, the song that makes me cry, the song that gives me chills, the song that felt like it was written for me and my people; in that last two minutes the Replacements leave everybody else in the whole fucking universe behind. And then Paul sings the opening couplet from the third verse, which just might be my favorite thing ever recorded.

Pretty girl keep growin’ up, playin’ make-up, wearin’ guitar
Growin’ old in a bar, you grow old in a bar

It’s just brilliant: the unexpected switch of “playin’ make-up, wearin’ guitar” and oh my god his voice, the sadness and empathy of “you grow old in a bar,” is a whole universe in and of itself, like he’s seen his future, her future, my future, your future, all of us sitting in bars, dancing in bars maybe even playing in bars, hoping to write or play or dance to or at least hear a song as amazing and brilliant as “Left of the Dial” before we grow too old. For at least a decade after this song came out, I started growing old in a bar. Well, many bars, actually.

I’ve always kinda loved the offhand slam at Los Angeles, especially back in the 1980s when it was a place I absolutely knew I was never going to live. I also love the tiny little pause during the last “your…name,” like he’s now absolutely sure she’s never going to be mentioned on any radio station. Which is probably true, because Blakey only toured with them in 1983, and the people who played on their first two records were Mitch Easter, Faye Hunter and Sara Romweber, so honestly, any college radio DJ in 1984-1985 would have only mentioned those three.

Which, of course, didn’t stop Paul from hoping. And so, Mars clacking his sticks against a stop-time one last time, the full band crashing in at exactly the right moment, Paul holds out that hope:

And the, the band picks back up, as Paul repeats “left of the dial” over and over again, guitars echoing him, Tommy & Chris singing harmonies, the song going ever higher, propelled by a majestic bass run from Tommy — who has actually been killing it throughout — a just fucking stunning on every level, until it inevitably ends.

I don’t even know how many times I’ve listened to “Left of the Dial” in the past 35 years. Hundreds, thousands, at least. It’s one of those songs that never ever left my head or my heart, increasingly making me sad for the younger person I used to be, but also making me happy that I was able to relate to a song like this so intensely. So maybe I can slice it this way: while “Answering Machine” is my official all-time favorite song, “Left of the Dial” is my emotional all-time favorite song.

“Left of the Dial”