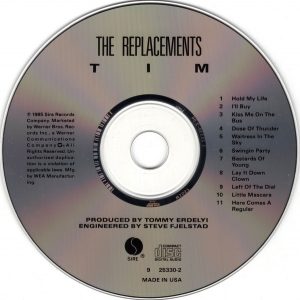 You and I fall together
You and I sleep alone
After all, things might be better
After one, and there’s one that’s long gone
For the moon, you keep shootin’
Throw your rope up in the air
For the kids, you stay together
You nap ’em and you slap ’em in a highchair

What’s so remarkable about “Little Mascara” is just unremarkable it is on the surface, and yet, and yet, on nearly every other album released in 1985 it would have the best song, a gorgeous combination of powerful rock, gorgeous melody and poignant subject matter.

I find that I don’t have a whole lot to say about “Little Mascara” — I don’t relate to the words in the same way I relate to the words of nearly all of his other songs — and I don’t have any anecdotes about how it affected my life. Still, I can tell you that I’ve often heard “all you’re ever losin'” as “all of your illusion,” which doesn’t make as much lyrical sense — the assumption is that she’s in tears — but is still kinda sorta poetical. And I love the ghostly backing vocals on “mas-carrrrr-a”. And of course, Paul’s utter empathy throughout. It’s one of my favorite Replacements contradictions, how a band that could be such complete public assholes could turn around and pull off a song with such a high emotional intelligence.

Afternoon, things are quiet
Settle back now if you can
Stations clip by like a rocket
Don’t you worry if you wonder why he ran

There’s a nice compare and contrast here between Billy Bragg’s immortal “Levi Stubbs Tears,” which is also about a woman dealing with the aftermath of a shitty relationship, though the woman in the latter song clearly had a harder time of it, and took her solace in a specific thing as opposed to channel surfing in tears.

And you can hear those tears on the bridge, as Paul just continues on from the final “little mascara” and holding out the word “cryyyyyyyyyyyy” over and over again until Bob swoops in with his guitar solo, which is short, sweet and sad. And that’s another notable thing about “Little Mascara:” it was the final appearance of Bob Stinson on a (U.S.) Replacements album during his lifetime.

After that, “Little Mascara” roars towards its conclusion, Westerberg adding more depth on the final chorus.

And on that last chorus, I love the pause between “all you’re ever losing is” and the last rounds of “little mascara” — and the guitar counterpoint deep in the background, as well.

As “Little Mascara” fades at the end, Paul screaming “crryyyyyyyyyyy” once again, the tears he’s singing about setting up the sadness of the final song, I’m always left a little gobsmacked at just how great the Replacements had become, to stick such a song where they did. If Let It Be seemed like a bolt from the blue, then putting a song on Tim that was so offhandedly great — kinda like “Our Love Was, Is” on The Who Sell Out — seemed to show that they could they might be able to do this for a long long time.