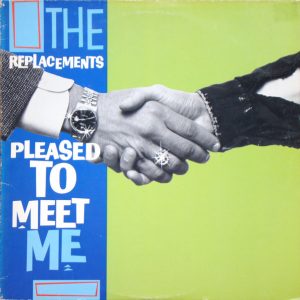 In any event, as if to assuage fans, they opened with a big tough rock song, which led into their most consistently-rocking record since their first, a half-dozen years ago, leavening it with unexpected horns & keyboards, as well as more harmonies and acoustic guitars. Oh, and another stellar batch of Paul Westerberg songs, where even the most rote (“Shooting Dirty Pool” and “Red Red Wine”) were full of wit and surprises.

The sound was bigger and bolder than on Tim, though perhaps Chris Mars’ drums had too much of that 1980’s boom, especially his toms, but it didn’t even matter, not the way Paul growled “step right up son” and how he and Tommy roll around with the “dooonne-a-wooonnnn-wonnnnnn.” Oh, and I always heard it as “you’re all talk,” not “you’re all fucked.”

Listen, it don’t cost much
I lay down the line that you touch
Never do what you’re told
There’ll be time, it’s easy when you’re old
You’re all wrong and I’m right

And of course, it was fun to hear Paul rail against having to play the major label game while at the same time playing the major label game — one of the main contradictions about the Replacements that was never ever gonna get resolved, and in fact, Paul’s imploring “please be on your honor” could easily be aimed right back at himself.

But what was even more fun was getting to hear Paul Westerberg, lead guitarist. Rather than instantly find somebody to replace the recently fired Bob, Paul — who had been playing solos since “Johnny’s Gonna Die“, after all — stepped up in a big way.

And while Paul was never gonna come up with the punk rock Steve Howe on speed solos that Bob pulled from Venus, his leads on “I.O.U.” fit the song perfectly, finding the slot in between Keith Richards and Steve Jones, and his call-and-reponse with himself on the actual short solo section is a thing of beauty, each note bouncing off of the drums.

In the end, Paul decides that maybe the honor system isn’t enough, and so in the coda the guy who refused to sign an actual contract with Twin/Tone asks the evil major label for a favor.

Good luck with that, Paul. In Trouble Boys, Bob Mehr tells the story that “I.O.U.” was inspired by Iggy Pop giving Paul an autograph that said “IOU Nothing,” which Paul got enough of a kick out of to turn into a song.

In April 1987, on the cusp of one of the more eventful summers of my life, I had no idea about any of that, instead I loved how Tommy came in on the harmonies of “wannnnnnt it in wriiiiiitinng“, and how much I wanted to say “I owe you nothing” to pretty much the entire world.