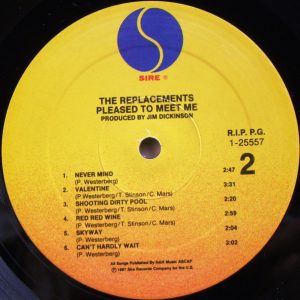 So they went back to “Valentine,” which was one of the songs they’d cut in the earliest demo sessions with Bob Stinson, but had abandoned in the course of the sessions. And praise be, because “Valentine” is one of my favorite songs on Pleased To Meet Me, if not my favorite, opening with big stomping power chords from Paul and a spare hi-hat beat from Chris Mars over which Paul sings what might be my favorite of all of his opening verses.

Well, you wish upon a star
That turns into a plane
And I guess that’s right on par
Who’s left to blame?

Somehow combining specificity with universality, “you wish upon a star that turns into a plane” is sad and hilarious, brutal and brilliant all at the same time. And then followed by the resigned “And I guess that’s right on par” while rendered over those galloping power chords lifted from The Who’s My Generation album, it never fails to make me sit up and sadly smile.

And then with a dynamite drum roll from Chris, and supported by an organ played by meddling producer Jim Dickinson (under to nom de b3 “East Memphis Slim”), “Valentine” kicks into gear:

And then with a big tom roll from Chris, they plunge directly into the chorus.

Tonight makes love to all your kind
Tomorrow’s makin’ valentines

There’s a cool pause each time he sings that chorus that always adds emphasis to the word “valentines”. And again without any hesitation they jump directly into the second verse, which features some really cool bass runs from Tommy Stinson after each line.

Hey, you pop up in this old place
So sick and so refined
Are you strung out on some face?
Well, I know it ain’t mine

And while that’s pretty much it for the verses, “Valentine” does with the pre-choruses: the first halves are always the same — because how are you gonna top “If you were a pill / I’d take a handful at my will”? — but the back half is different each time. It’s not a new trick for Paul, but “Valentine” is one of the more effective uses of it.

And then after some guitar / drums fireworks, Paul cranks out a solo that rolls and tumbles all over itself before a modulation and one last variation on the pre-chorus.

If you were a pill
I’d take a handful at my will
And I’d knock you back with something sweet as wine
Yesterday was theirs to say
This is their world and their time
Well, if tonight belongs to you, tomorrow’s mine

Chris Mars does a cool thing in the middle of all of this: one a couple of the backbeats he hits both his snare and floor tom at the same time for emphasis. So you’ve got “Yesterday was theirs to say” BOOM! “This is their world and their time” BOOM! And at the end, he’s driving a stop-time and a build on the final iteration of the chorus.

And as Paul repeats “valentines” a few times, I’m always reminded just how much I adore this song. It’s the “Favorite Thing” or “Little Mascara” of Pleased to Meet Me: an absolutely fantastic song rock ‘n’ roll tune that doesn’t announce itself as a major song within the context of the record. And I played the absolute living fuck out of it on the radio, probably more than any other song on this record.