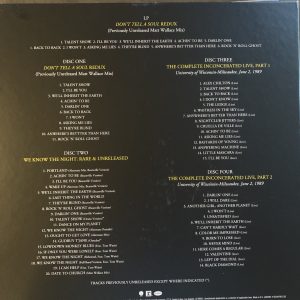 So while I enjoyed it, especially for the loose feel it had compared to the mostly tightly-wound Don’t Tell a Soul, it wasn’t like the Replacements didn’t already have their share of loose genre exercises. And while it was nice that they also collected it for Nothing For All, it was still nothing more than a pleasing novelty.

Apparently, during the Los Angeles sessions for Don’t Tell a Soul, the ‘Mats had the opportunity to meet and play with Waits, and they all hit it off grandly, and a meet-and-greet dinner ended up becoming a pretty wild session of drinking and jamming with the up-for-anything Waits. And while most of the session — as immortalized on the Dead Man’s Pop box set — was basically both as good and bad as you’d expect, they got at least one track good enough to be a b-side, “Date to Church.”

But for whatever reason, when they released that b-side, there was a whole track of Tom Waits’ singing backing vocals that they neglected — record company reasons? — to use. That was the version we heard for 30 years. And so when Matt Wallace restored Waits vocals in all of their drunken glory for Dead Man’s Pop, it all suddenly made sense to me. The addition of Waits — screaming, jiving, preaching, harmonizing — made all of the difference.

I mean, sure it’s still slight as all hell, but between Tommy’s walking basslines, Waits awesome organ riff, the handclaps, and the joyful “baaaaaa-ba-ba-ba-ba” chorus, it’s easily one of the more fun songs in the Replacements catalog.