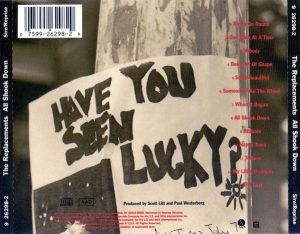 Without spoiling anything, she got better, of course. Her comeback album, 1979’s Broken English, jumpstarted her career, and she hasn’t stopped since thing, putting out over a dozen album in the 40 years since, the most recent in 2018. Go Marianne!

In any event, I bring her up, because, according to Bob Mehr’s Trouble Boys, Paul wrote “Sadly Beautiful” with the hope that she might record it.

I don’t think she ever did, but it was one of the first songs written for All Shook Down — according to the setlist of the Santa Clara show I saw, they played it back in May of 89.

Baby needs a brand new pair of eyes
‘Cause the ones you got now see only goodbyes
Had no chance at all to let you know
Oh so sadly, beautiful
Sadly, beautiful

A absolutely lovely and sparse character study, “Sadly Beautiful” is exactly what the title promises, Paul singing with his indoor voice, supported only by his 12-string, a dulcimer and some pedal steel. Oh, and Tommy on the upright bass.

One of my favorite motifs about the All Shook Down sessions was how much rockboy Tommy Stinson loved all of Paul’s slow sensitive songs, and the album as a whole. And it might be him, and it might not be him with hushed backing vocals on the bridge, which breaks the song in half.

Right after this, you hear the sound of a viola. Not just any viola, but John Freakin’ Cale’s viola, beaming in directly from 1967, adding an extra dimension to the song, even if it’s only there for a few seconds. It’s both rough and lovely, and just a perfect extra touch. “Sadly Beautiful” would have gotten across just fine without Cale, but with Cale, it’s that much more.