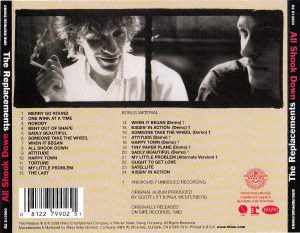 Out of all of the rockers on All Shook Down, “Happy Town” ended up being my favorite one: it felt more open and inviting than the rest of them, maybe because it felt the closest to me to a classic ‘Mats rocker like “Valentine” or “Little Mascara.” Also, most of the other rockers found their groove and rode it, but “Happy Town” had more raggedy weirdness than most of the other songs on All Shook Down.

Actors, authors, artists and thieves
Have afternoon parties where nobody heaves
Former strippers and junkies and men of the cloth
And we all fell in line and got lost

I think that part of it was due to drummer Michael Blair — one of two ringers on “Happy Town” — who bounced around the song with stop-times, half-times and big rolls at the end. He was nearly as unpredictable as Chris Mars, but still provided the thing that Westerberg wanted. The other part of it was the chorus, which was catchy as all fuck, and featured a joyful Tommy Stinson singing harmonies.

The other ringer was, of course, the eternally awesome Benmont Tench, who provided an organ solo that led into a guitar solo from either Paul or Slim that led into everybody yelling “happy town” a couple of times and then a second guitar solo, and finally the final verse.

The end is just basically more yelling of “happy town,” — because why not? –most especially Tommy, giving it everything he had while the guitars crunch and ring and Blair plays roll after roll until the fade out.