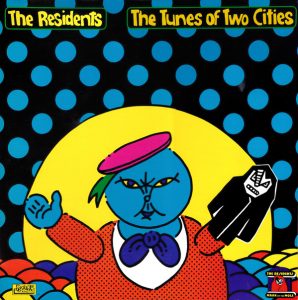 Look, if you don’t know about The Residents, I’m not the person to explain them to you. For the most part, I respected their deeply weird, deeply subversive music and videos more than I actually enjoyed them. Especially the videos, which I assume are out there on YouTube.

And yet, the Residents have one song that is weirdly important to me, but more for utilitarian reasons than emotional reasons. That song is called “The Secret Seed,” and it served a very specific purpose in my life: it was the theme song for my radio show on KFSR.

Even now, it seems unlikely that I would pick a Residents song as my theme song. And believe me, it was unlikely then, and while I have no specific memory of exactly when I picked “The Secret Seed,” — or indeed, when I even listened The Tunes of Two Cities, which was the second installment and backstory of their Mole Trilogy, for those of you keeping score at home — I still remember why I picked it: because it was weird and memorable and provided a clear aural transition from whatever poor bastard who was on the air before me to let the world know that the god damn Barefoot Boy Wonder was now on the air!

And to be sure, “The Secret Seed” was just that: 2:42 of what sounded like footsteps for percussion and random ringing tones that shot out of the center of the song like lasers and a synth line that sounded liked 24th century New Orleans funeral procession where everybody was on 24th century heroin. The good stuff.

Of course, it often never got that far: basically what would happen is that the DJ before me would say their goodbyes and start their last song, whereupon I would cue up “The Secret Seed” — for some reason, I never put it on tape, preferring the adrenaline rush of knowing that it was the only thing on the air — and then while it was blaring at the listener, cue up my first song.

At which I would open the mic and say something like: “Those ringing tones can only mean one thing: it’s Friday at 3:00 here on 90.7 KFSR. My name is Jim Connelly, and I’m not wearing any shoes, which is why they call me the ‘Barefoot Boy Wonder.’ Anyways, let’s get into the music . . . here’s The Replacements, from Pleased to Meet Me, with ‘Valentine.’

And since I picked up every airshift I possibly could on top of my regular Friday at 3:00, I played “The Secret Seed” at the top of each one, so figure two or three times a week, for much of the 1980s. Which means that technically — though it never once finished — “The Secret Seed” was the song I played the most times as a college radio DJ.