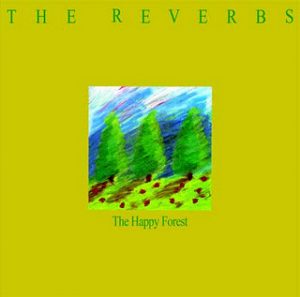 I know I mentioned this when I wrote about R.E.M., but there was definitely a swath of indie rockers in 1984 who heard Murmur and Reckoning and thought not just “we could do that” but rather “we should do that.”

Because for guys like me, hearing some obscure band like the Reverbs stick their arpeggiated guitars in the middle of a catchy song like “Trusted Woods” was good enough, even though it was the only song that stuck with me from the debut — and swan song — The Happy Forest EP.

But so what? “Trusted Woods” featured pure guitar pop chord changes, traded vocals on the chorus and such a vibrant pep it was chosen to be the lead track on a 2020 compilation of mid-1980s jangly guitar bands called Strum and Thrum: The American Jangle Underground 1983-1987.

Of course, that might also be that The Reverbs, much like their Athenian counterparts in Oh-OK, had a future ringer in them. In the case of The Reverbs, that ringer was Ric Menck, a power-pop lifer who is best known for being the drummer and songwriter for the mighty Velvet Crush, who will definitely be featured in this blog.

But either way, “Trusted Woods” is still a prime example of a kind of music that should have been bigger than it ever was.