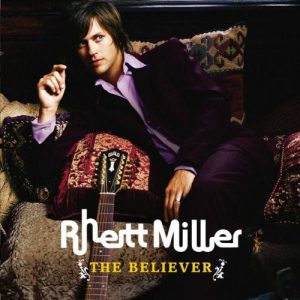 Rhett Miller’s second solo album of the 21st century, 2006’s The Believer, was a record that I think I underrated at the time. And I think that was because the two best songs on it were songs that he’d already done with the Old 97s, the loping “Singular Girl” and the heartfelt “Question.”

One thing I know for sure: I totally missed the title track, which was inspired by Elliott Smith, who had recently killed himself.

Starting of with just Miller and an acoustic guitar, “The Believer” is unsparing:

And I believed you

Miller has always had an exceptionally clear voice — no obscuring or swallowing his words — and his sweet sad holding the note on “belieeeeeeeeeeeeved” is pitch perfect.

As is the chorus, coming in after the full band has kicked in, always supporting, never overwhelming.

There aIn the end Miller just repeats “you won’t be around anymore” as the music swells and builds and builds and swells, like he’s trying to convince himself to believe the worst, but doesn’t want to be a believer yet again. Not in this case.