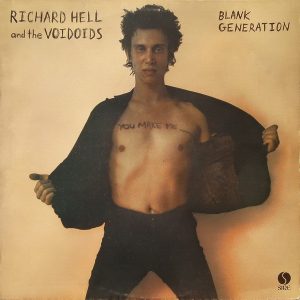 I was saying “let me out of here” before
I was even born, it’s such a gamble when you get a face
It’s fascinating to observe what the mirror does, but
When I dine it’s for the wall that I set a place

Hell, of course, was in Television with Tom Verlaine, his early soulmate and eventual nemesis, and while he’s not on any of the recordings that made Television famous in certain circles, you can definitely hear each man’s influence on the other, though some of Verlaine’s on Hell was mitigated Robert Quine’s utter contempt for, well, pretty much anything.

In Hell’s autobiography, I Dreamed I Was A Very Clean Tramp, Quine comes off as a total irascible iconoclast, but he was also utterly unique guitar player, which is why his first band is the fourth to be featured in this column, as he went on to make indelible contributions to the music of Lou Reed, Lloyd Cole and Matthew Sweet.

On “Blank Generation” his guitar leads seemingly come from an outer space zone where all they listen to is free jazz, each and every one of his notes stabbing you in the gut like a demented ninja. It’s kinda cool, because Quine comes in after every single chorus, which is one of the greatest and most memorable in punk rock history.

It’s a multifarious and multifaceted chorus, slippery as fuck, as “blank” takes on every single possible meaning possible, from “so fucked up, you have no thoughts” to “whatever ‘blank’ means to you, mannnnnn.” And extra kudos to Marc Bell right here, later to be far more famous when he joined the Ramones, but cementing his place right here with his stop time magic in the second part of the chorus.

I first heard “Blank Generation” in the context of the That Summer! soundtrack, a magical compilation for a film that I’ll never see, but was the first time I heard magical songs like “I Don’t Want to Go to Chelsea“, “Do Anything You Wanna Do” and future Certain Song “Teenage Kicks.”

In the end, everybody harmonizes “ooooooh-ooooooh-oooooh-oooooh” a few times, followed by a “weee-ooooooh”, and “Blank Generation” ends, having done as much damage as it set out to do. Unlike most of their CBGB brethren, Richard Hell & The Vodoids never made it past the “cool band” phase, possibly because it took five years for a follow-up, by which time Blondie had had a #1 hit, Television had made two classics and broken up, Ramones had starred in a film and Talking Heads had world-changing work.

But that doesn’t matter, because 40+ years later, “Blank Generation” is still a mind-blowing song.