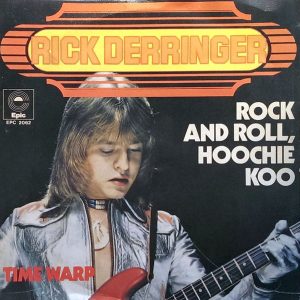 I’m going to assume that both those versions got play on FM radio, though I’m too young to verify that with an actual memory or anything. What I do remember is hearing “Rock and Roll, Hootchie Koo” a titled distinguished by spelling out the word “and,” as well as the comma. None of this matters, of course, because no matter how it’s spelled, it’s a great piece of funky rock.

I couldn’t stop moving when it first took hold
It was a warm spring night at the old town hall
There was a group called The Jokers, they were layin’ it down
‘Cha know I’m never gonna lose that funky sound

Anchored by a riff that kids in guitar shops might still be playing, and sung with bluesy enthusiasm by Derringer, “Rock and Roll, Hoochie Koo” really came alive during its chorus, a call-and-response between Derringer and his chick background singers.

At this point, Derringer really had the song down, because outside of the background singers, and Bobby Caldwell holding down the drum fort, it’s pretty much all Derringer. Which just makes his flash solo over his rhythm guitar that much more fun. Though not as much fun as the “can you even say that on the radio?” third verse.

I hope you all know what I’m talkin’ about
The way they wiggle that thing really knocks me out
I’m gettin’ high all the time, hope you all are too
C’mon little pussy, gonna do it to you

After that, the final minute of “Rock and Roll, Hoochie Koo” was all chorus, Rick asking to get his fuse lit, trucking on out to spread the news, etc.

In any event, according to Billboard, “Rock and Roll, Hoochie Koo” made it all the way to #24 on the Billboard charts in early 1974, the third time in a year a Derringer-associated song had climbed the charts, the other two being “Free Ride” and the immortal “Frankenstein,” both of which he produced.

And while it wasn’t the first brush with the charts for Rick Derringer — he’d played and sang on the immortal “Louie Louie” rip, “Hang on Sloopy” — it was kind of the last. Well that’s not entirely true: I mean, he never stopped working, releasing albums under his own name and with his band, Derringer — which was, confusing, to say the least. And in 1984, he produced and played lead guitar on yet another chart hit: Weird Al’s “Eat It,” which made it all the way to #12 in the Billboard Hot 100 on the strength of a parody video that somehow topped the already silly one Jackson had made for “Beat It,” which, of course, featured a guitar solo from Eddie Van Halen.

I’ve already told the story of how — the first time I heard Van Halen, it was through their cover of “You Really Got Me,” which I thought was a Rick Derringer song. And of course, Van Halen covered “Rock and Roll, Hoochie Koo” in the early days. So having Rick Derringer parody an Eddie Van Halen guitar solo weirdly completed a circle in my head.