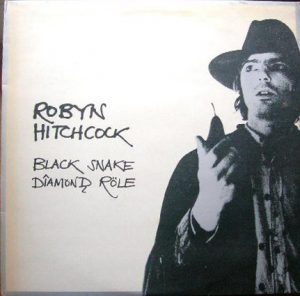 And I am: as far as I’m concerned, in terms of solo artists, it goes: Bob Dylan, Neil Young and Robyn Hitchcock. Maybe Bruce before Robyn. In any event, I became a fan in the mid-1980s, and I’ve followed him ever since, through all of it. I’ve seen him a few times in concert: the first time in 1986, the most recent time in 2017. Not every single record he’s made has resonated with me, but enough have that I still look forward to every single release, even after all this time.

So let’s start at the beginning, with side one, track one of Robyn Hitchcock’s solo debut, 1981’s Black Snake Diamond Röle.

He came bursting out of nowhere like a sphere into the sky
And he cast his light on everything, it was like he never died
And he landed right on target, but the target rolled away
And it left him pointing nowhere you could hear the children say

He’s the fellow, the man who invented himself

While Hitchcock was obviously a known quantity, “The Man Who Invented Himself” was a bit of an, er, reinvention. Gone were the trademark dueling guitars that marked the Soft Boys, and in its place was a pounding piano — half John Lennon, half John Cale — and a horn section playing a hooky riff. (Said horn section has disappeared from the reissues, BTW, because they lost the master with it.)

It’s also pretty much all Hitchcock, with an assist from ex-Soft Boy and future Egyptian, Morris Windsor on the drums. And, of course, the eternally surrealistic lyrics:

When you’re waiting for your baby to get back from the moon
And throw her arms around you, in a fairly quiet lagoon
Well that loneliness is nothing, just imagine how he feels
He’s the only person in the world who still believes he’s real

By this time, the guitar has come sneaking in, circling around the piano, which was already circling around itself, adding yet another layer of hookiness to an already insanely melodic song. It’s emblematic of Robyn Hitchcock’s greatest trick: he’s an absolute master at writing a great melody that sticks in your head long after the song is over. As we are going to see over and over in the next month or so.

“The Man Who Invented Himself”