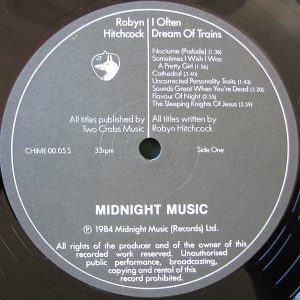 Your mother is a journalist, your father is a creep
They make it in your bedroom when they think you’re fast asleep
The scenes that they’re enacting now beside your little bed
Are never in your consciousness but always in your head

Like, for example “Sounds Great When You’re Dead,” which centers around a circular guitar riff that’s practically begging to have drums behind it. Instead, he uses the piano as the percussion instrument, playing chords for emphasis, and then explodes into a John Cale take on the chorus.

The contrast between the guitar-led verses and the piano-driven choruses give “Sounds Great When You’re Dead” a punch-drunk, woozy feeling, especially when combined with Hitchock’s scarily etherial harmonies.

And while you could hear how the verses and choruses could be performed with the band, it all goes out the window in the middle, when Hitchcock goes off-script with a meandering piano solo that sounds almost classical as it wanders away from the rest of the song.

And while it eventually gets corralled, it’s definitely one of the reasons I’m glad that he chose to record it as a solo overdubbed song. Because it sounds great, whether you’re alive or dead.